Mercedes is readying an update to its range-topping GLS seven-seat SUV and with it a new ultra-luxurious Maybach version. It’s set to renew its rivalry with the Bentley Bentayga and Rolls Royce Cullinan, with the facelifted model bringing styling tweaks and an infotainment upgrade to stay competitive with its rivals.

There will be plenty of subtle changes to this refreshed model. At the front we see a larger grille and potentially new air intakes below. The Multibeam LED headlight clusters look unchanged from the outgoing model and although the front end is clad in camouflage and black trim, we expect the new Maybach GLS to feature lots of chrome here.

This pre-production example is fitted with 22-inch alloy wheels sitting over some unsurprisingly huge brake calipers. There’s also chrome trim on the sills, side windows and door handles. The Maybach D-pillar badge is missing from this test model, but will probably be applied to finished production cars.

The rear doesn’t feature any changes since the last set of spy shots we saw so there’s still heavy camouflage over the rear lights and tailgate, suggesting that the facelifted car could receive a new set of tail-lights. Elsewhere, there’s a gloss black lower bumper with chrome body protection and a thin chrome trim accent, all of which are shared with the outgoing Maybach. 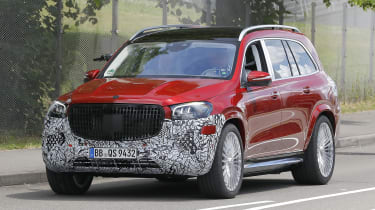 Inside, the GLS line-up will be brought into line with Mercedes’ latest models, featuring a new steering wheel with a double spoke design similar to that used in the S-Class luxury saloon.

The infotainment system will also be upgraded to Mercedes’ latest MBUX set-up. It’s unlikely that the new portrait-orientated touchscreen that debuted on the S-Class will make its way to the SUV, but the new GLS should receive the latest ‘Hey Mercedes’ voice assistant tech and upgraded computing hardware. A new stereoscopic 3D instrument panel, as used in the S-Class, may be on the cards however.

Under the skin, the new Maybach GLS is likely to be fitted with the same 4.0-litre AMG-built twin-turbocharged V8 engine, with 48-volt mild-hybrid assistance. Currently, this produces 549bhp and a healthy 730Nm of torque, but with plenty of headroom in the output of the engine in this specification, the facelifted Maybach GLS might receive a power increase for more effortless cruising and improved performance.

Check out our list of the best luxury cars to buy…