Few cars have a history like the Honda Civic. Now in its 11th generation with this all-new car, the Volkswagen Golf rival’s story spans 50 years – and the Golf is actually a good place to start.

That’s because VW’s hold on this class has slipped with its eight-generation family hatch, and with the latest Civic Honda has developed a recipe very much of the moment compared with many rivals in this class. While many competitors offer plug-in hybrid power alongside the more conventional choice of petrol or diesel, the Japanese brand is offering just one engine option: a full hybrid powertrain to keep things simple.

However, it’s a hybrid with a slight twist. The Civic’s 2.0-litre four-cylinder engine – which now features direction injection tech – mostly drives a generator, which charges a compact 1.05kWh battery. This then supplies an electric motor on the front axle, which means most of the time the Civic drives like an EV – and with 181bhp and 315Nm of torque from that e-motor, the latter figure particularly important, it also has the kind of smooth performance you often associate with a fully electric car.

The petrol engine can also drive the wheels directly, and the window in which this operation takes place has been widened compared with the similar system in the hybrid C-RV SUV. It means, in theory, accelerating on A roads or motorways is more relaxing as the engine shouldn’t suddenly kick in, sending the revs roaring.

And on that subject, it’s worth explaining the Civic’s transmission. CVT stands for ‘Constantly Variable Transmission’ and in some cars – such as the Toyota Corolla hybrid – this type of gearbox can cause a flair of engine revs and lots of noise when accelerating due to the way the gearbox constantly adjusts its ratio for the best performance/efficiency balance.

However, the while the Honda’s eCVT does constantly vary the amount of energy sent to the wheels, it does so electrically rather than mechanically, so the name is something of a misnomer; the only roar from the engine you really get is under hard acceleration when the petrol unit sends maximum power to the battery.

When you do, with Sport mode selected, Honda has even engineered in what it claims to be a VTEC-like feeling; according to the brand’s technical consultant, Kotaro Yamamoto, because the electric motor does most of the work, the combustion engine can be manipulated to give a kick and also simulate gear changes.

In practice it doesn’t quite feel like this, but the Civic is still good to drive. The steering has a surprising weight to it and the suspension delivers good body control balanced with a supple, fluid ride, so the car doesn’t roll too much in corners, but neither does it crash or bounce over bumps, damping out most intrusions with a welcome degree of composure.

Ask for everything and this top-spec Civic Advance test car will deliver a 0-62mph time of 8.1 seconds. This is far from where the car is most comfortable though – with the electric motor delivering a strong surge of torque from low down, it’s best on part throttle, accelerating swiftly but keeping a focus on refinement too. 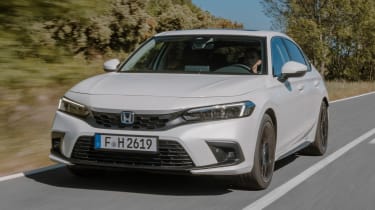 Despite Honda marketing this new car as “the driver’s hybrid” – and it does live up to that billing mostly, with a ‘Winding Road Detection’ function that keeps the petrol engine driving the wheels directly to reduce lag on acceleration – it’s still more effective at a leisurely pace, where you’ll get closer to its claimed fuel economy of 56.5mpg. We easily managed more than 46mpg on our mixed test route. CO2 emissions stand at 114g/km for this Advance model on 18-inch wheels.

The strong efficiency is, in part, down to a tailgate made of resin, which is 20 per cent lighter than its predecessor’s, as well as an aluminium bonnet that saves 43 per cent compared with the old model’s steel panel. The Civic’s new body is also 22 per cent more rigid.

Its 30mm longer than the 10th-generation model, while the wheelbase has grown by 35mm too. This means a pretty generous amount of legroom inside, and although the roofline is now 25mm lower – the smoother, sleeker shape helping to reduce drag and improve efficiency – headroom is still acceptable. A 410-litre boot can’t match a Skoda Octavia’s, but it easily beats the Golf and Corolla.

Whereas the Golf used to be the most premium-feeling mainstream family hatch, that’s not true of the current-generation car, and this new Civic feels more upmarket than its German rival.

Material quality is good, and like the recent HR-V compact SUV, there’s a clean and simple horizontal design theme to the dash, with Honda highlighting its new air vents that create a wider dispersion of air.

What’s more important is the infotainment set-up. The nine-inch touchscreen is placed high up on the dash so it’s easy to see, but the flat panel could be focused a little more on the driver. The system is an evolution of what we’ve seen in the brand’s Jazz and HR-V, with clear menu tiles that are easy to navigate, even if response times could be a little snappier.

There are plenty of features, with sat-nav built in, but you might prefer to use the standard Android Auto or Apple CarPlay compatibility, which display well on the screen. We also like that there are physical buttons for the ‘Home’ and ‘Back’ keys, while the rotary knobs for the climate control are a functional delight, too.

The digital dash (a full 10.2-inch panel only features on top-spec Advance trim) isn’t quite as good; we’d like more configurability.

All these points are to key to a successful family hatchback that has to deliver in many areas, and the Civic stands up well to this test. However, price is of course a key factor too, and with strong predicted residual values thanks to a renewed focus on retail sales rather than fleet registrations for the brand, it also means Honda can offer some more competitive finance deals; we know this is how the majority of buyers in the UK choose to purchase.