Hyundai’s all-electric Ioniq sub brand could not have got off to a better start. Its Ioniq 5 was named Auto Express Car of the Year and World Car of the Year, with its unique design getting plenty of plaudits along the way, too.

Now it’s the turn of the Hyundai Ioniq 6 to take its bow and Auto Express was given an exclusive tour of the new model by Hyundai’s chief designer SangYup Lee.

Think the Ioniq 6 looks familiar? Not only has it been inspired by the 1930s streamliner design era (with Lee particularly referencing the 1936 Stout Scarab), but it was also previewed by Hyundai’s Prophecy concept from 2020. According to Lee, Streamliner could’ve been the actual name used for the car, but they decided to just leave it as a nickname instead.

Although the 6 is longer than its sibling, its width and wheelbase (1,880mm and 2,950mm respectively) are near identical to the Ioniq 5, hinting at the shared architecture of the two electric models. Both sit on Hyundai’s Electric Global Modular Platform (E-GMP) so although no technical details are available for the Ioniq 6 yet, we’d assume similar battery options: either 58kWh or 77.4kWh. Rear and four-wheel drive versions are also expected.

The slippery shape of the 6 is likely to mean slightly longer ranges, too, so possibly around 320 miles from bigger-battery versions. That shape hasn’t changed much from the Prophecy concept, as SangYup Lee revealed. “The roof has been raised, but otherwise we’ve tried to be pure to the concept,” he said.

It’s a very different look to the Ioniq 5, with Lee stressing that he and his team have been keen to avoid the Russian Doll look that other brands adopt. “It’s a chess look,” he told us. “Every car has its own distinct look, but like the pieces on a chess board they’re part of a family.”

However, there is a Lee design feature that all Ioniq models will have: “There are similarities in the lighting signature,” he said.

Once again, intricate ‘Parametric’ pixel lights feature, this time more extravagant at the ducktail-styled back, across the full width of the boot and on the raised rear spoiler. They’re at the front, too, but limited to within the main headlight unit, where the detailing is impressive and includes a small Ioniq 6 badge. A black strip beneath the headlights runs the full width of the car and hides some of the myriad safety sensors.

The curves of the bonnet where it leads into the windscreen and roof are reminiscent of the Audi TT, while the back even has hints of the Porsche 911. “We didn’t want to frame this car as a sedan,” said Lee, although it is a four-door car with a boot, but with coupé lines.

Surfaces are very clean with pop-out door handles and cameras instead of wing mirrors – although we expect real mirrors to be available, too. 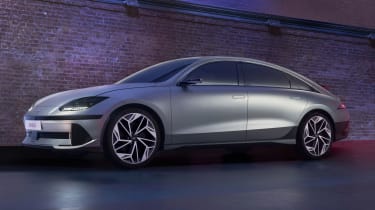 A contrasting colour is used lower down along the side to reduce the mass of metal, but the slippery shape has enabled Hyundai to register a drag coefficient of just 0.21 – again, that’ll help make the Ioniq 6 go further on a full charge.

There’s a similarly simple but stylish look on the inside, too, with a single display unit that houses dual 12-inch infotainment and instrument displays – with the expected connectivity present and correct.

“We wanted to create a mindful cocoon,” Lee told us, “Like a personal studio. We haven’t used light piping; we’ve bounced light onto different surfaces and the light changes depending on your mood.”

That’s especially noticeable on the door panels where a gentle, striped lighting effect is used to help up the premium feel – although build quality, even on the very early car we assessed, was good.

“We’ve made sure there are flat, usable surfaces inside,” said Lee. “And we’ve taken the Hyundai emblem off the steering wheel – why does everyone have their badge on the steering wheel? Instead, we have lights that will react to voice recognition and show the charging level.”

At either end of the dash are a couple of wings that house screens to display the view from the side cameras, while separate heating, ventilation and infotainment fast keys sit below the central vents to reduce the reliance on the touchscreen.

The clever detailing inside gives the Ioniq 6 a premium feel, while there’s eco-friendly leather or recycled materials on the seats and elsewhere around the cabin. Even the paint used is eco-friendly.

Despite the fastback roof, the Ioniq 6 is a proper four-seater with surprising headroom and even decent space for a fifth passenger in the centre of the back row, thanks to a flat floor.

We’re a little way away from full technical details, specs and prices being revealed, but expect the Ioniq 6 to have a starting price above £40,000 with order books open later in the year and first deliveries expected in early 2023.