There’s something very British about the sound of a new Range Rover Sport going full pelt down the main straight at the Goodwood Motor Circuit. The noise of the 4.4-litre V8’s exhaust note bouncing around the pit garages is almost like a Spitfire flying overhead with its distinctive Merlin V12 growling away.

Behind the wheel of the all-new SUV is Matt Becker, Jaguar Land Rover’s new vehicle engineering director and the man responsible for leading the team fine-tuning the Range Rover Sport.

We say fine tuning because Becker has only been in his role for five months, following a seven-year stint at Aston Martin where he was responsible for, among many other things, the firm’s first SUV, the DBX – a competitor for the new Range Rover Sport.

Becker pulls into the pit lane and we jump in to what is the most luxurious Range Rover Sport cabin yet, dominated by the large 13.1-inch Pivi Pro infotainment screen. Having just jumped out of a new Range Rover the difference is clear – there’s no less luxury, but it feels like you sit lower in the Sport with the cabin surrounding you more. It just feels sportier, as it should do.

Becker guns the Sport away from the pit lane and we’re well in excess of the motorway speed limit as we approach Madgwick Corner, the BMW-sourced 503bhp V8 growling away but without the supercharged whine of the old JLR engines.

With barely a touch on the brakes and the smoothest of steering inputs the Sport is through the first corner and then flat out through Fordwater. Becker is not only a master at the art of setting up a car, he’s as skilled behind the wheel as pretty much anyone else you’ll find, with a reputation for being a drift king, too.

So will the new Range Rover Sport drift? “Yes,” said Becker with a smile, “although the roll stability control does interfere,” as it does when we exit Lavant on the throttle.

According to Becker, the building blocks of the Range Rover Sport were strong when he turned up, with much of the work now going on about tuning the software – something he and the team had been doing at the Nürburgring the week before.

“It’s got dual-chamber air springs and the same dampers as the DBX,” says Becker. “It’s got rear-wheel steer, which makes a big difference – the manoeuvrability is amazing and it’s so easy to drive.”

It feels it, too, with 700NM of torque catapulting the car out of the corners and Becker’s smooth steering inputs revealing a composed and controlled chassis – there’s barely any body roll or tyre squeal, despite the weight and speed carried through the corners. 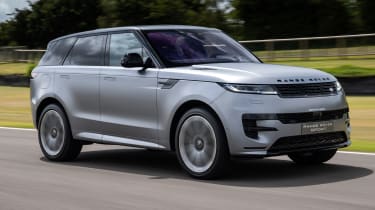 After a couple of impressively fast laps, Becker turns left onto the outside of the circuit and onto a rough gravel track, probably about as off-road as most Range Rover Sports will go.

He switches from Dynamic to Normal mode, telling us a little about the changes that brings. “When you’re in Dynamic mode it changes the damping, the active roll control and the spring rates go to the higher spring rate,” he says. “When you switch back to normal mode it switches to the lower spring rate.”

As with the new Range Rover, which shares its platform with the Sport, the ride is hugely impressive. Even on the 23-inch wheels of our car, the Sport barely wobbles over the broken and bobbly surface. It’s quiet, too, as Becker agrees. “The rolling comfort and noise isolation on this car is amazing,” he says.

As the new boy in the business, Becker is still getting used to the JLR way, and his colleagues adapting to his way of working – which is deeply involved, as Becker is as much an engineer himself as the man responsible making the cars drive match the brands’ DNA.

He’s also been hugely impressed by the software teams at JLR. “There’s a lot of talent here – a lot of the software we write ourselves, which really adds value to the business.

“It makes life easier for me, too, because if there’s an element of software missing then it’s no problem – we can write the software ourselves. With off-the-shelf stuff you have more restrictions.

“The beauty of these cars is software over the air – it allows the engineers to go longer [in the development programme]. And in the future, you could have over the air feature updates – so if you had a sports car and you were going to the Nürburgring you could just buy the app for that circuit.”

Becker’s responsibility is for “all driven attributes” of JLR’s vehicles – including the upcoming all-electric new Jaguar models. That also means off-road ability of the Land Rover and Range Rover models, too, although our off-roading is limited to some mild low-grip stuff on the banking on the outside of Madgwick Corner, which the Range Rover Sport covers with ease.

From our brief test, the new car feels pretty much ready to go and already hugely impressive. So how much work has to be done on the car now? “We’re pretty much there to be honest,” said Becker.

That being the case, new Range Rover Sport customers have every reason to feel very excited.

Now read our review of the full-size Range Rover…