Spierling is Irish for thunderstorm and while it didn’t exactly make a thundering noise up the hill, the electric powertrain with roughly 1,000bhp (technical details are still yet to be provided) gave McMurtry’s creation incredible acceleration. A 0-62mph time of under two seconds has been claimed, which seems about right judging by Goodwood’s clip of the Spierling’s run.

The McMurtry Spierling is more than just power however. The tiny proportions of just 1.1 metres tall, 3.5 metres long and 1.7 metres wide, coupled with a carbon-fibre body, give it a sub 1,000kg kerbweight. The advanced fan car aerodynamics produce 2,000kg of downforce, allowing it to put all that power down efficiently, while the lack of weight means McMurtry is aiming for over 300 miles of range on a charge. 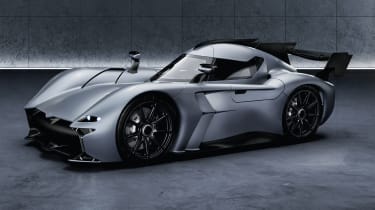 He’s done it again! @maxchilton has just broken the Timed Shootout and his outright record in the McMurtry Spéirling. The VW ID.R has been beaten with a ridiculous time of 39.081 seconds. The Future of Motorsport Power presented by @dhlexpressuk #gw_DHL #FOS #Hillclimb #record pic.twitter.com/5Lr2ODJzrt

McMurtry has also claimed it has plans for the Spierling to become a road-legal car. The firm says it is “perhaps the wildest electric car to ever wear number plates”. We imagine the production numbers will be limited and that the price tag will rival the most expensive hypercars on sale. The aggressive aero may be toned down for road versions, however.

We don’t know when Murtry hopes to reveal a Spierling you can drive on the road, but prospective buyers can reserve theirs now on the company’s site.