After months of spy shots, Hyundai finally seems to be getting closer to revealing its new Ioniq 6, the latest all-electric car from its Ioniq sub-brand. While the new images don’t reveal much, they do confirm the new car will take on a much more curvy design than the angular Ioniq 5.

The Ioniq 6 will rival the likes of the Tesla Model 3 and BMW i4 in the all-electric executive car market and we expect it to go on sale in the UK next year. These official images from Hyundai show the Ioniq 6 will incorporate elements from the Prophecy Concept.

The rounded wheel haunch at the front and digital rear-view camera and flush-fitting door handles should help increase the aerodynamic efficiency of the Ioniq 6, as should the closed-off air intake in the front bumper.

We can see a roofline sloping down to a rear light bar, which may double up as a bootlid spoiler. It’s not as aggressive as the one found on the Prophecy Concept, however. Hyundai’s matrix LED ‘Parametric Pixel’ design for the rear lights appears again, this time as a vertical unit instead of the horizontal one found on the Ioniq 5. There are also air vents behind the rear wheels next to it to reduce drag. 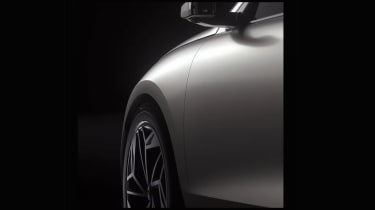 We have previously spotted the Ioniq 6 testing, highlighting features such as a new design of diamond-cut 20-inch alloy wheel and the rounded front end. We also found out the suicide doors of the concept won’t make production.

Hyundai’s 800V E-GMP architecture will underpin the Ioniq 6, accommodating the 77.4kWh battery pack found in the Kia EV6, rather than the 73kWh unit used for the Ioniq 5. This means we should see the Ioniq 6 surpass the Ioniq 5, with a 311-mile range.

A 301bhp set-up will be reserved for the range-topping model at launch. Less expensive versions of the Ioniq 6 will also be available, featuring a smaller 58kWh battery pack and a single electric motor, making a starting price of £40,000 plausible. It is conceivable that the car could support an N variant, following the expected Ioniq 5 N.

Inside, the Ioniq 6 will take more inspiration from the Ioniq 5 than it does from the Prophecy concept, borrowing the former model’s dual-screen infotainment system. It will also come with a conventional centre console and a tunnel-like armrest running from the dashboard through the middle of the cabin. The Hyundai Ioniq 5 has previously received over-the-air updates to improve the infotainment; we expect the Ioniq 6 to also be capable of gaining OTA updates too.

Now check out the best electric cars on sale now…