The BMW 3.0 CSL ‘Batmobile’ is one of the German firm’s most iconic designs and it’s set to be revived for the 21st Century. We’ve previously seen BMW pay tribute with the 3.0 CSL Hommage concept car back in 2015 – but this time there’ll be a real, road-going car you can buy.

CEO of BMW’s M division, Frank van Meel, posted three images of the camouflaged car to his Instagram page. The front has been entirely redesigned, as has the back. We see it sporting a similar grille to the Hommage concept, a smaller design to that of the current M3 and M4. The headlights are also a different shape and there are new air intakes sitting beside a revised lower grille section.

Towards the rear we see a roof-mounted spoiler and bootlid spoiler – both of which are a nod to the original 3.0 CSL. The rear lights and the bumper also look like they’ll be different to those on the M4. 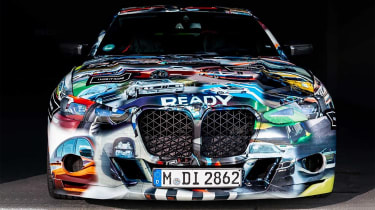 The whole body is likely to be crafted from carbon-fibre and there’ll be developments underneath, too. We recently saw the new M4 CSL being revealed with a 3.0-litre twin-turbo, straight-six engine producing 542bhp and 650Nm of torque. A new exhaust system was specially developed for that car and we could see the same powertrain in the 3.0 CSL – albeit with even more power. The current M4 is available with four-wheel drive in xDrive guise, but we expect the 3.0 CSL to be solely offered with a traditional rear-wheel drive layout.

The biggest change (for the UK market at least) will come with the introduction of a six-speed manual transmission – hinted at by a part of the camouflage that says ‘6MT FTW’. Given that transmission’s supposed torque limit of around 600Nm, it will be interesting to see how, or if, BMW incorporates a more potent powertrain.

Numbers will be limited if the ‘I like it rare’ wording on the bonnet is anything to go by. It’ll command a significant premium over the new M4 CSL’s £128,820 price tag. The full reveal should happen by the end of the year to mark the 50th anniversary of the start of BMW’s M division.

Check out the latest BMW news and review here…