Cleaning your car is a great way of getting up close and personal with the paintwork and spotting any blemishes that may well be missed during everyday use.

Looking at the bodywork from different angles can reveal the light marks that will take the edge off any shine you add with a wax or coating. Removing them requires a scratch remover, although anything you can feel with a fingernail will probably need a machine polisher or professional attention.

Returning a shine to the clearcoat can be done by hand, and to find the top products, we marked long-neglected paintwork with a plastic ice scraper and added a fine line with a knife tip. These were tackled with 20 and 30 wipes and progress assessed after each attempt. Price was also a factor.

Unlike several of our other categories, this test has produced an all-new top four. The shift to a more heavily marked test bonnet and placing the focus of the scoring on the improvement in finish may have been the reason. But it certainly suited Regenerate, which is primarily designed to be used with a rotary or dual-action polisher, although it can be applied by hand to take out swirls.

Angelwax says it can be used to remove up to 2,500-grade sanding marks. Along with the rest of the top four here, it topped the results for finish improvement, leaving a shine in stark contrast to untreated areas and most of its rivals’ attempts. It had trouble with the plastic ice scraper marks, but fared better on the fine knife line, where it only had to give best to ValetPRO. A competitive price was enough to give it a narrow victory over the similar Advanced Compound.

Some scratch removers don’t actually do what they say on the tin, but instead fill marks so they become less visible. No fears of that with Advanced Compound, because it is free of filler and contains no wax or silicones.  Like our winner, it can be applied by machine polisher or hand, but has a 3,000-grade maximum abrasion, putting it in the same medium-cut compound range as Regenerate. It marginally topped our tests, but not by enough to overcome Regenerate’s price advantage. 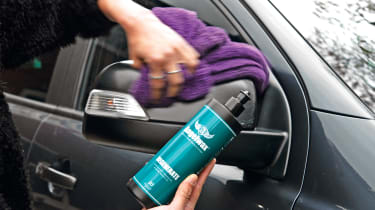 We didn’t have high expectations of Tripple, because products that aim to improve and protect paint tend to do neither well. We didn’t test what kind of water-repelling finish Tripple left, but it certainly improved our tired paint. And it was adding a shine where Tripple excelled, matching the best with a glossy finish. It struggled to make the same headway with the plastic and metal blade marks as our top two, but did reduce their impact. And with a keen price, that was enough to put it in our top four.

This compound is the middle stage in Soft99’s three-step polishing system, making it another medium-cut formula like our winner. It is also designed to be used with

a machine polisher.  Despite this, it worked well with just hand application, making good improvements to the overall shine in its section. Much like Auto Finesse’s Tripple, it could not make the same inroads on the blade marks as our top two, but it did enoughto secure a top-four finish.

Now that your paint is repaired, protect it with the best car wax and sealant…