These latest spy shots give the clearest look yet at the new Porsche 911 GT3 RS, and highlight the fact it’s packed with plenty of motorsport-inspired details. The most track-focussed 911 has already been seen testing on the Nurburgring in Germany, but these images showing an essentially undisguised car on public roads suggest an official unveiling is imminent.

Based on the already excellent 911 GT3 that launched last year, the GT3 RS is set to offer an even more serious driving experience.

Catching the eye immediately is the huge rear wing. Like the GT3, it’s a racing car-inspired swan neck design, except it’s even bigger on the RS. Not only is the rear wing’s size an important marker of the new GT3 RS’s performance intent, it also demonstrates what Porsche’s engineers are able to deliver when not constrained by strict motorsport rules. The wing is likely to incorporate an active DRS (drag reduction system) element similar to the system used on Formula One cars, which opens the wing  to reduce drag on straights, before closing for corners to produce maximum downforce.

Elsewhere, there are front wing slats to ventilate air away from the wheels and brakes and a new front splitter. The RS also gets new, more aggressive bonnet vents and further intakes behind the front and rear wheels. At the back there’s a dual exhaust system that droops down towards the tarmac – whether this is to help with noise reduction for prototype testing or the full production design remains to be seen. The exhausts jut out of the middle of a similar diffuser to the GT3’s. 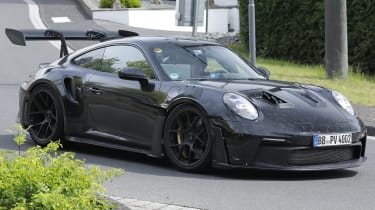 The RS will use the same naturally aspirated 4.0-litre flat-six engine as the GT3, but as with previous RS models power is expected to increase marginally. That said, this unit is already at the limit of its development, so it’s likely that most of the new car’s performance increase will come from its more advanced aerodynamics and tweaked suspension.

Generally, the GT3 RS has packed around 20bhp more than its regular GT3 sibling since power differentiation was introduced between the pair with the 997.2 generation models. As such, a natural position for the new RS to take up would be an output of between 520 and 530bhp, while drive will be sent to the rear axle via a seven-speed PDK automatic transmission.

While the standard GT3 is available with a manual transmission, it’s not yet known if Porsche will extend this to the circuit-biased RS. In the recent past GT3 RS models have been PDK-only in the pursuit of laptime performance.

Check out the best track day cars to buy now…