This is our latest look at BMW’s hot new XM, which has been caught testing ahead of its public debut later this year. The super SUV has been designed to celebrate 50 years of BMW’s Motorsport division, as well as take on the likes of the Porsche Cayenne Turbo S E-Hybrid and Aston Martin DBX 707.

Like the Porsche, BMW’s new SUV will feature plug-in hybrid power, which with 644bhp will be the firm’s most potent ever. The series model will be called XM, and BMW has confirmed that the new machine will be available exclusively in M guise, making it the first standalone M model since the firm’s iconic mid-engined M1.

Judging by these spy shots the production car should look very similar to the Concept XM that was revealed late last year. It previews BMW’s “progressive” next-generation styling language for its luxury models, with trademark oversized kidney grilles just like the new 7 Series, although horizontal rather than vertical bars feature here. Similar to the concept, heavy creases flow back from the grille on the high bonnet to give it a more aggressive front end.

The grille itself is flanked by a pair of ultra-slim headlight units that have been split up into two separate modules on each side, with an angular bumper lower down. Squared-off plastic-clad wheelarches give the XM a rugged look, while the roof height is low, and the glass house has been kept shallow to give this high-riding off-roader some sporty proportions. The wheels fitted to this test car likely won’t feature on the production car, which is already confirmed as having 22-inch wheels as standard and 23-inch wheels as an option.

Towards the rear, the slightly tapered roof features a deep cut-out, while the tailgate is small and the bumper big. Quad exhaust pipes in two stacked pairs appear on either side. The tail lights reflect the headlight design, with thin LED bars that run from the rear wings onto the boot lid.

Having driven the XM in prototype guise, we can say the XM’s interior design is more akin to BMW’s internal combustion engined cars rather than the likes of the iX. It’s a sportier cockpit layout with bucket seats from other M division cars. That said, expect to see BMW’s latest wraparound TFT screen sitting on the dash. 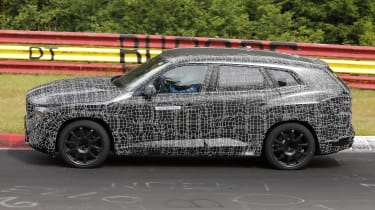 In the Concept XM we saw BMW’s “M Lounge”, contrasting sporty front seats with diamond-quilted velvet upholstery.  There was also an illuminated sculptural headlining that, when lit, offers a three-dimensional form, with the ambient lighting possible in BMW’s M colours.

The XM will be powered by a new 4.4-litre twin-turbo V8 engine, codenamed S68. It’s mated to a 25kWh battery that powers an electric motor mounted inside the car’s eight-speed automatic transmission, which sends power to all four wheels through BMW’s M xDrive drivetrain.

Total output stands at 644bhp and 800Nm of torque, but the electric motor can deliver 194bhp on its own for up to 10 seconds (the rest of the time it packs a 161bhp punch) and 450Nm of torque. This figure is some way off the Concept XM’s 739bhp and 1,000Nm of torque, but should be enough to rival the hottest SUVs on the market.

BMW has claimed that an all-electric zero-emissions range of up to 50 miles will be possible. For reference, its current large plug-in hybrid SUV, the X5 xDrive45e, offers up to 54 miles of claimed range from its 24kWh battery, which feeds a 111bhp electric motor. A 7.4kW on board charger is standard, so a full top-up will take less than three and a half hours. The brand hasn’t confirmed efficiency data yet.

The XM will be fully unveiled in September this year ahead of an expected launch date in March 2023. Prices for the sporty SUV could start from £120,000.

Now read our list of the best hybrid SUVs…