Alfa Romeo’s Quadrifoglio performance models will make the transition to pure-electric, boss Jean-Philippe Imparato has promised – and there could yet be a place for the badge to feature on the newly launched Tonale.

The most potent version of the Audi Q3 rival so far is the plug-in hybrid variant, which has a combined output of 271bhp. But Imparato believes that the car’s chassis could “cope easily with 300bhp, or more”. And while a Tonale Quadrifoglio is not imminent, he says that customer demand could persuade Alfa Romeo to develop it.

“Quadrifoglio is not the vocation of Tonale, for the moment,” Imparato told us. “For this car, I focused our energy on the transition [to electrification] so for the moment I’d say Tonale is a plug-in hybrid with 271bhp and a zero-emissions range of up to 50 miles.

“If we have a good response from the public, and expectations, then I will work on other possible development, but it is not a priority. I will put the energy on the development of Quadrifoglio on probably the other launches – except if I have tons of customers asking for something special on Tonale. If that happens, then we will see.” 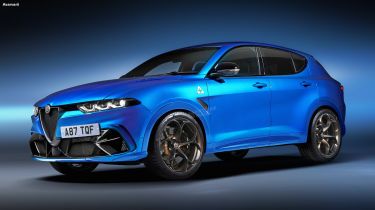 Imparato suggested that Quadrifoglio will play a role as he nudges Alfa upmarket, but as the brand switches to pure-electric, it will have to do so while still delivering authentic performance. “Quadrifoglio will stay with us,” he said, “and we will develop it on top of each and every product, provided that we can achieve the right level of performance.

“Quadrifoglio is the little baby you protect, because you cannot afford to betray the DNA. It’s a kind of umbrella on top of models, but with the highest level of performance – I mean 0-62mph in two to three seconds, less than 20 minutes for a full charge, the right level of range, handling and so forth. It will be pricey, but I will have all of the power I need to feed this proposal coming from Stellantis.”

For pure EVs, the largest of Stellantis’s three new architectures supports electric motors producing up to 442bhp, potentially enabling a four-wheel-drive model with more than 800bhp. And the group has promised a 0-62mph time of “as little as two seconds”.

Imparato confirmed that Alfa will use Medium and Large versions of STLA, with the latter chosen for mid-sized vehicles because of the power and battery options it offers.