Ford has a rich history of taking its beloved Ford Transit panel van, sticking in a powerful engine and calling it a ‘SuperVan’. Here’s the latest one and for the first time, it’s gone electric.

Somewhere underneath the performance-focused body is a ‘track-ready chassis’, based on that of the new Ford E-Transit electric van. True to the SuperVan tradition there’s very little crossover between the Transit and this motorsport-spec offspring.

We first saw the SuperVan back in 1971 as promotional vehicle for the original Transit. Since then we’ve seen various new Transit generations come with a SuperVan special, but we’ve not seen one since the Cosworth V8-powered Mk3 from 1994.

Powering the new Electric SuperVan are four electric motors, a 50kWh battery and a bespoke control system resulting in an estimated 1,972bhp – that makes it more than twice as powerful as a McLaren P1 hypercar. All that power is sent through a four-wheel drive system resulting in a 0-62mph time of under two seconds.

The Electric SuperVan combines an E-Transit Custom floorpan with a steel spaceframe and lightweight composite body panels. The aggressive look is achieved with a front splitter, side skirts and rear diffuser as well as huge cutaways in the rear three quarter to help flow air to the rear wing. The result of all this should mean the SuperVan will produce enough downforce to make the most of its power.

Despite the proportions, the SuperVan should handle well. There’s double wishbone suspension at each corner with motorsport-grade subframes, uprights and brakes. A full roll cage and FIA standard bucket seats feature inside, too.

There’s plenty of tech on board the Electric SuperVan. On the dash is a large SYNC touchscreen from the Mustang Mach-E and it retains most of the same features including WiFi connectivity. The display also allows for different drive modes. ‘Road’ mode allows for ‘normal’ driving, ‘Track’ is obviously for track driving, ‘Drag’ means maximum acceleration designed for use with drag racing radial tyres, ‘Drift’ can make the SuperVan go sideways as well as perform on snow and ‘Rally’ is for tarmac and gravel rally stages.

On top of these modes are traction and launch control systems, a pit-lane speed limiter and regenerative braking to maximise battery efficiency. Surprisingly, there’s even an ‘Eco’ setting for low speeds to conserve energy. 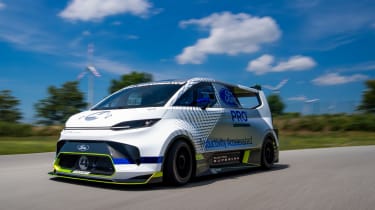 Despite the crazy performance on offer, the SuperVan retains some practical elements. This includes a loadspace behind the driver, a side loading door and a new secure release system.

The Electric SuperVan will be setting times up the Goodwood Hill Climb event this week. At the wheel will be Romain Dumas, the current record holder on the hill with the Volkswagen ID.R in 2019. We imagine the SuperVan will get fairly close to the record.

Ford can’t resist tinkering with its Transits and the resulting series of one-off Supervans have grabbed plenty of attention down the years.

The original Supervan was conceived as a promotional tool for the Mk1 Transit in the later stages of its life span. It was built on a Ford GT40 chassis with the low-slung supercar’s 400bhp V8 mounted in the middle. With the Transit van bodyshell on top, it could hit a claimed 150mph but aerodynamics of the high riding shape meant you probably didn’t want to try it.

A decade after the Supervan 2, Ford was back at it. The Supervan 3 was ostensibly based on the facelifted Mk3 Transit but at a reduced seven-eighths scale. The engine was a Cosworth HB unit, a 3.5-litre atmospheric V8 built for Formula One. In 2004 the Supervan 3 was refurbished with a new Ford-Cosworth Pro Sports 3000 V6 engine.

Not a Supervan in the truest sense, the Transit SuperSportVan was nevertheless a one-off performance Ford Transit built to promote the more workmanlike range. The machine received a slightly more mundane 3.2-litre five-cylinder diesel packing 200bhp but Ford added racing stripes, a bodykit and wheelarch extensions to emphasise the point.

Check out all the latest news and reviews on vans here…