Earlier this year, Lotus Advanced Performance was launched, promising to bring various existing elements of the British sports car brand (including motorsport and the Lotus Driving Academy) under one roof, with various new services added to the roster.

Speaking to Auto Express at the Goodwood Festival of Speed, Simon Lane, who’s heading up the new endeavour, gave some indication of what’s to come.

Perhaps the most interesting part involves special vehicles, which Lane explained will be arranged in three “tiers”.

“The first one is using existing platforms to develop our own low-volume, special runs of cars,” he said, adding, “So we’ve got three platforms down there [Emira, Evija and Eletre] – we could potentially top out those cars, do something different with the powertrain and so on.”

Possibly giving some context to an image of a mysterious single-seater included in the original Lotus Advanced Performance press release, Lane revealed another part of this plan. “We’ve got a really good relationship with Clive Chapman and Classic Team Lotus across the road [from Lotus’s Hethel HQ], and discovered some incredible designs that were done in the Colin Chapman era that never saw the light of day,” he said. “So wouldn’t it be amazing to bring one or two of those to life but maybe with a modern twist?”

Tier two involves restomods, with Lotus having no shortage of revered cars in its back catalogue to make more useable. “Some of the most iconic classic cars if you drive today, I’d argue they’re not actually that nice to drive”. Under the skin would go modern suspension, updated interiors and drivetrains with “modern power levels”. 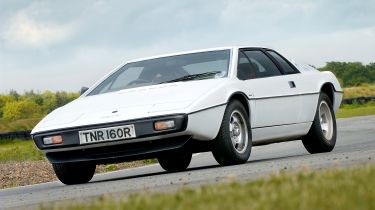 One way Lotus may do this is with electric conversions. “We can potentially electrify an Esprit for example – that’s something we’re thinking about doing,” Lane said.

We won’t have long to wait before seeing the fruits of these efforts, with the first official restomod Lotus set to arrive in 2023.

The final tier of special vehicles involves motorsport, from which we’ve already seen something – the new Emira GT4.

Meanwhile, Lotus Advanced has already started planning and executing events for owners, and its first bespoke vehicle options will appear on the Evija electric hypercar.

The Emira will join the fray, starting with a Lotus Advanced colour palette arriving on the configurator towards the end of 2022, and special graphics are also on the way.

Anything more intensive will have to wait. “To go into true bespoke, I’d like to get there, but we need to learn to walk before we try and run.”

Now read our full review of the Lotus Emira…