Another of Bentley’s famous cars from the early days of its 103-year history has been recreated by its coachbuilder sub-division Mulliner. Following the “huge success” of 2020’s Blower Continuation Series, the company will now apply the same treatment to the Le Mans-winning Speed Six.

Each Speed Six Continuation Series car will be built meticulously by the same team behind the Blower project using a 3D CAD (computer-aided design) model of the original with two vehicles used for reference. Original blueprints are to be utilised, too.

Helping Bentley’s in-house team will be a raft of heritage specialists from across the country supplying recreated parts said to be identical to the originals – and in some cases made using the original production methods.

The Speed Six was first devised as a high-performance version of the 6 ½ Litre, with twin SU carburettors, a higher compression ratio and a new camshaft raising the power of its in-line six-cylinder engine from 147 to 180bhp. The continuation cars will match the specs of the racing version, which included a 200bhp variant of the same engine and a slightly shorter wheelbase.

At the hands of the Bentley Boys – a group of well-off drivers who raced various Bentley models from the mid-twenties through to 1930 – the Speed Six was very successful. Its most significant achievements were wins at the 24 Hours of Le Mans in 1929 from Woolf Barnato and Sir Henry ‘Tim’ Birkin, and again in 1930 when Barnato partnered with Glen Kidston. 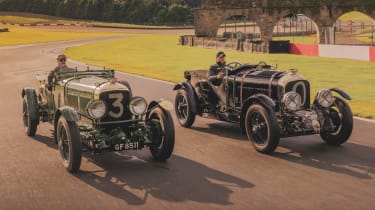 The third Speed Six entered into the 1929 race – known as ‘Old Number Three’, a car still raced by its owner today – has been used as a reference for various design details. A 1929 road car with the race-spec Vanden Plas body from Bentley’s heritage fleet collection has been used for handling and performance data capture. The first new car to emerge from the project is set to be completed during the second half of 2022.

Like the Blower Continuation, the Speed Six Continuation is priced at a hefty £1.5million, and only a dozen examples will be made. Bentley hasn’t had any trouble finding buyers as all 12 cars have been reserved.

Bentley chairman and chief executive Adrian Hallmark had this to say about the new project: “The Speed Six is one of the most important Bentleys in our 103-year history, and the 12 cars of the Continuation Series will embody the same values as W.O. Bentley’s originals, crafted by hand with the same meticulous attention both to engineering quality and to fanatical attention to detail.

“The lucky owners will be able to race their cars around the world, and truly relive the exploits of the original Bentley Boys.”