Continental made bold claims about the performance of its new SportContact 7 when the new flagship tyre was launched at the end of last year. Compared with the SportContact 6 it succeeds, the firm said it had made major gains in the wet and dry.

In our initial, limited comparison at the Continental proving ground those claims were backed up with major improvements detectable over the old design, mainly in the wet. But then, all new tyres claim to be better than their predecessors and pretty much always are. The big question was how would the new tyre fare against rivals in the UUHP (ultra ultra high performance) sector?

To find out, when travel restrictions and weather conditions allowed, we headed to Continental’s Uvalde, Texas, facility, which has hosted several of our annual tyre tests.

All tyres were 235/35ZR19 91 Y and below we list their EU tyre label ratings. For wet braking (WG) and fuel economy (RR), A is the best, and for pass-by noise the lower the better. Rivals were chosen based on our sister magazine evo’s tyre tests, where both are former winners in 18 and 19-inch sizes. All were sourced from the retail market.

There may have been only three contenders, but the tests were exactly the same as our usual summer tyre comparison.

The biggest differences between tyres is always in the wet, and we measured the distance taken to stop from 50mph. We also assessed performance in deeper water, measuring grip in a straight line and on a curve. For the former, the car was accelerated with one wheel in water and we measured the speed at which it was spinning 15 per cent more than the tyre in the dry. For the lateral result, the car was driven on a tarmac circle with one flooded section at ever higher speeds until all grip was lost.

Pure lateral grip was measured by lap time around the wet circle, and finally, we headed to the handling course. This replicates, bar a couple of corners, the test track at Continental’s proving ground in Hanover, Germany.

Dry performance was rated on a part of the handling course, which combines sweeping bends with hairpins and a lots of elevation change, plus braking from 100kph (62mph).

We also measured cabin noise over a range of surfaces. Results were based on an average of several runs and the primary test car was a VW Golf GTI Mk7. Industry-standard rolling resistance tests gave us a fuel economy comparison, while a small role in the result is played by the price (from blackcircles.com).

To calculate the winner, we converted all results to percentages and combined them. Wet performance accounted for 50 per cent of the total, dry 40 per cent and the rest the final 10. Within the wet and dry sections we put the emphasis on handling and braking.

It is rare for new tyres to perform worse than the models they replace, but the gaps are often small, to the point where many launches provide no comparison. That wasn’t the case at the SportContact 7’s debut last year and when we compared the old with the new, we knew why. Continental has really found something with the new tyre and even the most insensitive tester could feel the difference.

Our time in Texas proved that it retains this performance advantage over its rivals and not only its ageing predecessor. Just one second place, in curved aquaplaning, prevented a clean sweep of the driving tests. And these weren’t narrow wins – the Continental was clearly ahead of its rivals, particularly in the wet, where it had an advantage of more than three per cent.

It was a step ahead on the handling circuit, too, with a sharpness others could not match. Front-end grip was particularly strong, helping the car accurately hit apexes and pulling it through the turns with impressive traction. The rear was stable and only moved if provoked, helping the Continental to a 68.4-second lap, almost a second faster than the Pirelli.

It was similarly sharp on the sweeps and direction changes of the dry handling course, but the margin was down to just under half a second.

The new SportContact 7 has raised the performance bar for UUHP tyres, giving it a clear advantage over its leading rivals.

New to the market and successor to the popular SportContact 6 – which has a rating of 4.6/5 from more than 220 customers – this tyre looks set to build upon the strong reputation for performance established by its predecessor.

While the Continental is the new kid on the block, Michelin’s Pilot Sport 4 S is one of the oldest, having been around since 2017. And before you ask why we aren’t testing the Pilot Sport 5, which was launched earlier this year, that is a replacement for the 4, not the 4 S. It’s also aimed at smaller tyre sizes and is not as performance-orientated. 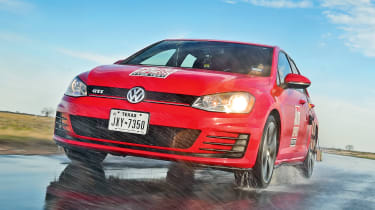 Although a replacement for the 4 S is in the pipeline, this is not a tyre that is feeling its age at all. It even won one test – fuel economy. This is often a category where new tyres using the latest technology prevail, but the 4 S had the measure of its younger rival here by a small margin. The Michelin will use around one per cent less fuel than the Continental and just over two per cent less than the Pirelli.

Elsewhere, it squabbled with the Pirelli behind the pacesetting Continental. In the dry, the Michelin had a narrow advantage over the F1 tyre supplier largely thanks to stopping almost two metres shorter – and within 30cm of the winning SportContact.

It was just 0.1 seconds off on the handling track, where it couldn’t match the Continental’s sharpness and needed more lock. In the wet, it felt secure with decent traction, but good front grip too easily overcame the rear.

Good all-round option particularly in the dry. It lacks a little in the wet, but that’s balanced at the pumps.

Winner of the evo Tyre Award in 2020, this tyre is a favourite with customers. Over 2,700 reviews have resulted in an overall score of 4.7/5. Customers often commend the tyre’s handling, comfort and stability.

The latest iteration of the P Zero, the PZ4, has been around a little longer than the Michelin, but it doesn’t feel like a tyre at the end of its life. Just as its French rival, it has a good, secure feel in wet and dry, but is short on agility and sharpness alongside the SportContact 7.

The Pirelli has a slight edge over the Michelin in the wet. The P Zero was runner-up in handling and cornering, and won the curved aquaplaning, while the 4 S was ahead in braking and straight aquaplaning. There was just over half a metre between the two in braking, but neither was close to the Continental.

It was out on the handling circuit where the Pirelli was able to get closer to the Continental. It recorded an average 69.2-second lap time to the SportContact’s 68.4, but it felt a lot less lively. It required more lock than the Continental, and the driver had to wait longer before applying the throttle to maintain the line on exit. A small amount of rear movement helped rotation, but not enough to counteract the lower traction.

In the dry, the P Zero struggled in braking – it was some two metres away from the winner and overheated quickly on the handling circuit. It took top spot in our cabin noise test, although subjectively there felt little to choose between the three.

Controlled rear movement makes this fun to drive in the wet and it is effective in the dry at UK temperatures. Braking could be improved.

Since being launched, this tyre has gained a strong reputation among our customers – scoring 4.6/5 from over 350 reviews. Positive reviews have highlighted reliable grip and responsive handling.

Unlike tests where the number of rivals is in double figures, there are no bad tyres here. But the margin of victory – often less than one per cent in past tests – is a clear indication that Continental has set new levels of performance for this sector.

The SportContact 7 has a sharpness that rivals cannot match, plus it’s able to turn that lively feel into quick lap times and short stopping distances. Remarkable.

If the Continental is a clear winner, then there’s little to choose between the other two. Neither gives any cause for concern in the wet or dry, but the Michelin suits high-mileage drivers where economy is a factor. If wet grip is key, go for the Pirelli.