Forming a big part of BMW M division’s 50th anniversary celebrations is a new and arguably long-overdue member of the M3 line-up in the shape of the BMW M3 Touring estate.

While BMW did produce a one-off concept version of the E46 M3 Touring in 2000, this was a technical exercise for M engineers, rather than a serious exploration into a practical bodystyle for the then coupé and convertible-only performance icon.

Since then, the M3 has become a saloon, while the coupé and convertible models have adopted the M4 badge. Now, the estate version is finally here, and it has the Audi RS 4 Avant firmly in its sights.

It’s set for its first public outing at the 2022 Goodwood Festival of Speed, and BMW has identified the UK as a key market for the M3 Touring, second only to Germany in terms of predicted sales. With the most recent generation of M cars, the UK has only taken the higher power, high-spec Competition versions over the base models offered elsewhere. But there’s no alternative for the M3 Touring in any country because it’s built solely as a Competition model.

That means that under the bonnet is a twin-turbocharged 3.0-litre straight-six developing 503bhp and 650Nm torque, with a redline of 7,200rpm. That power gets to the road via an eight-speed automatic gearbox and xDrive four-wheel drive. BMW claims 0-62mph takes 3.6 seconds, which is just one tenth of a second slower than the M3 Competition xDrive saloon. Top speed, as ever, is electronically limited to 155mph, with the option to raise this to 174mph by selecting the optional M Driver’s Package.

The visual transformation compared with the 3 Series Touring includes the addition of the vertical kidney grilles, an aggressive bodykit, wider wheelarches and a large diffuser featuring a quad exhaust set-up. 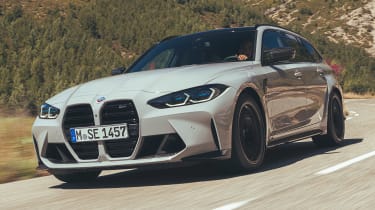 There are plenty of optional carbon-fibre trim elements and lightweight, forged alloy wheels measuring 19 inches up front and 20 inches at the rear, behind which sit larger brakes. Carbon-ceramic discs are available as an option, but the brand’s adaptive M suspension is standard fit.

Boot space matches that of the standard 3 Series Touring. With all seats in place, the M3 Touring can take 500 litres of luggage, while folding the rear bench increases this to 1,510 litres. The M3 Touring retains the standard car’s novel tailgate glass, which can be opened independently.

Inside, the M3 Touring adopts the updated interior of the newly facelifted 3 Series, complete with an M division makeover. The brand’s new ‘Curved Display’ infotainment and instrumentation system is used, with a 12.3-inch digital instrument panel seamlessly combining with a 14.9-inch central touchscreen.

M Sport seats are standard, but carbon fibre-backed bucket seats are available as an option. Merino leather upholstery is standard, too, but full leather in four different shades is also available.

Order books for the M3 Touring open this September, with production commencing in November. UK prices will start from £80,550, which is a premium of more than £2,000 over the M3 saloon.