Bentley’s in-house personalisation service, Mulliner, has worked on a new Continental GT, featuring performance and chassis tweaks as well as the usual added luxury. The enhancements to the GT Mulliner take it above the GT Speed in the Continental’s model range.

The GT Speed model receives plenty of performance upgrades, including electric all-wheel steering, ‘Bentley Dynamic Ride’ which features three-chamber active air suspension, carbon ceramic brakes and an electronic limited slip differential. The adaptive ride means the GT Mulliner can resist body roll using electric motors that can generate up to 1,300Nm of counteracting force in 0.3 seconds. The system was introduced on the Bentayga  has featured on other Continental GTs, but has now been revised for the Mulliner.

The exterior tweaks are subtle, with a new 22-inch wheel design unique to the Mulliner, an exclusive range of paint finishes and a new Mulliner signature grille. There’s also the option to choose between silver and black for the front vents and wing mirrors. The outer door sills receive Mulliner text and the puddle lights have been swapped for ‘Mulliner Welcome Lamps’. 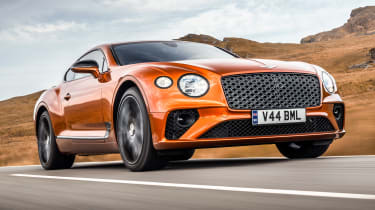 As you’d expect the GT Mulliner is the most luxurious Continental GT yet with plenty of scope of customisation. Buyers can choose from a unique array of ‘primary’ and ‘secondary’ interior colours as well as the full suite of materials and colours Bentley offers for the leather, veneers and stitching.

As standard the GT Mulliner comes with diamond-quilted seats and there’s embroidered Mulliner logos in the headrests. The dash features a new diamond-milled finish with Grand Black walnut surfacing either side. Sitting in the middle is a unique Breitling clock and the passenger side fascia is finished with a silhouette of the car’s profile, coupled with a Mulliner logo. The LED instrument cluster also gets a new design.

The GT Mulliner will be on show at the Goodwood Festival of Speed this year alongside the new S variants of the Continental GT and Flying Spur. Pricing hasn’t been revealed yet, but expect it to start significantly higher than either the GT Speed or V8 models.