The Prodrive P25 will be on show later this week at the 2022 Goodwood Festival of Speed, and is one of a planned production run of 25. The price? A cool £552,000 plus, depending on what each buyer specifies for their car.

At the heart of the P25 is an original Impreza WRX two-door chassis; these were employed by the Prodrive-engineered Subaru WRC cars from the 1997 season onwards, before Subaru’s official widebody two-door for the road appeared in 1998 with the 22B badge. However, allied to this World Rallying-class chassis are a number of modern weight-saving tactics, more power and vehicle dynamics made possible with higher-tech suspension and brakes.

The bootlid, bonnet, roof, side sills, door mirrors, front and rear quarters, rear wing and bumpers are all made from carbon composites, and mean the car weighs less than 1,200kg.

Under the bonnet is a modern 2.5-litre Subaru flat-four, turbocharged and equipped with new parts including uprated cylinder liners, pistons and new variable camshaft timing. It produces 400bhp and 600Nm of torque, and is allied to all-wheel-drive and a six-speed semi-automatic transmission. The car can cover the 0-62mph sprint in less than 3.5 seconds. 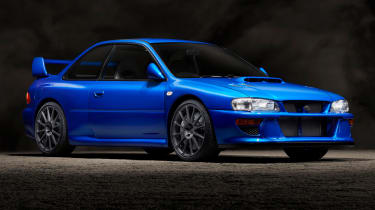 Gearshifts are controlled by a shifter paddle on the steering wheel, while the car also features a launch control system. The all-wheel-drive system is supported by an active centre differential, while there are limited-slip differentials on the front and rear axles. Adjustable dampers from specialist Bilstein are fitted, while the braking is from AP, with vented discs front and rear.

No interior images have been revealed, but Prodrive claims that the driver will be looking at a ‘high-definition multi-page display’ which includes a data logger. A WRC style ‘fly-off’ handbrake is combined with a new electronic parking brake system. The interior itself plays up to the authenticity of the original 22B, but with upgrades including trim combining leather, Alcantara and carbon fibre. The car seats four, but a full roll cage and lightweight race seats can be optioned.

The car will be built in Banbury at Prodrive’s UK headquarters, with first deliveries taking place before the end of 2022.

Read all the latest Subaru news and reviews here…