Nissan’s latest, third-generation Qashqai improves over its predecessor, with more space, better on-board tech and useful practical touches that give the Japanese manufacturer’s family crossover just enough of a lift to remain relevant in an increasingly competitive market.

The trouble is that the Qashqai’s close rivals are more proficient than ever before, meaning buyers will have to seriously consider where they wish to place their money. Nissan’s evolutionary take on its best-selling Qashqai recipe feels like an opportunity missed and, while it remains a solid proposition, it isn’t a class leader.

Nissan hit gold with the introduction of the Qashqai back in 2007. The Japanese manufacturer’s decision to move away from the traditional fare of the Almera hatchback and Primera saloon struck a chord with families seeking stylish 4×4 looks, plenty of space and low running costs, and the winning crossover formula has now seen over 600,000 Qashqais registered for UK roads and millions more sold worldwide.

The second-generation Qashqai, launched in 2014, didn’t need to do much more than finesse the original car’s obvious qualities and sit back and take the plaudits. However, the pace of change, particularly over the past ten years or so, has been nothing short of exponential, with manufacturers keen to cash in on the crossover craze.

Some of our favourites include the impressive Hyundai Tucson (our Mid-size SUV of the Year for 2021), the revitalised third-gen Ford Kuga and the stylish Peugeot 3008, although the VW Group offers a capable trio in the shape of the Tiguan, Skoda Karoq and SEAT Ateca.

Further Japanese competition comes from the Toyota C-HR, Mazda CX-5 and Honda CR-V, while the exhaustive list of rivals continues with the Kia Sportage, Renault Kadjar and Vauxhall Grandland all worthy of finding a place on the family driveway.

So, the latest Qashqai certainly has its work cut out, attempting to convince a new cohort of buyers that it still has what it takes to fit seamlessly into family life. Confusing then, that Nissan would launch the latest iteration of the Qashqai without its e-power hybrid system that offers the greener efficiencies so sought after in today’s market. 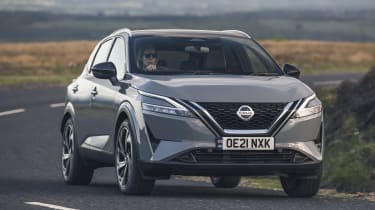 Instead, the Qashqai initially comes with just a 1.3-litre, 12V mild-hybrid petrol unit in 138bhp or 156bhp form, with the e-power variants arriving later in 2022. There is a choice of a six-speed manual or CVT auto transmission, while four-wheel-drive is available in combination with the higher-powered engine and auto ‘box.

A wide range of trim levels are available, starting with the entry Visia spec and moving through Acenta Premium, N-Connecta, Tekna and top-of-the-range Teckna+. The limited Premiere Edition was also available at launch.

Nissan has already seen fit to make some revisions to the Qashqai range, possibly reflecting the need to remain competitive with a slew of talented mid-size family SUV rivals. Along with minor exterior cosmetic changes, levels of standard equipment have been improved with a 12.3-inch infotainment screen now available on N-Connecta trim and above.

The price for entry into Qashqai ownership has climbed to around £25,500, with £40,000 required for a top-spec car, although Nissan offers appealing finance deals which might help to persuade buyers away from the crossover pack.

You won’t find the popular Nissan Qashqai in short supply on the used market. Since it first arrived in the UK in 2007 the Japanese mid-size SUV has positioned itself as the ‘go-to’ option for families in need of a practical car that’s good to drive. The Qashqai may have developed a rather anonymous image over time, but it was quite revolutionary when it was first launched – offering buyers a funky new crossover style.

The Mk2 Nissan Qashqai range offers reasonably efficient engines and decent levels of kit, although the base cars can be a little sparse. There has been mixed feedback regarding the Qashqai’s overall reliability, so make sure to check over the car’s history and ensure any recall notices have been attended to. Both front- and four-wheel-drive models are available, along with manual and CVT auto versions, so buyers should be well catered for. Read our full Mk2 Nissan Qashqai buyer’s guide here…

The Mk1 Nissan Qashqai still provides great family transport. Its crossover-style good looks and useful practicality mean it will still appeal to buyers seeking a capable SUV. Of course, time has marched on, but the first-generation Qashqai is becoming more affordable, and its low running costs will suit those on a budget. Look out for the reasonable mid-spec Acenta models which include parking sensors and climate control, while if you’re after a little more luxury then the top-spec Tekna versions, boasting leather upholstery heated seats and a panoramic glass roof, could hit the spot. Read our full Mk1 Nissan Qashqai buyer’s guide here…

For an alternative review of the Nissan Qashqai, visit our sister site carbuyer.co.uk…