The Multivan is the pinnacle of the MPV concept. Not because it’s a new model in a dying sector, but because it reinvents the formula by mixing van-like dimensions with car-like handling and quality. This eHybrid is best when fully charged – a pure petrol or diesel will make more sense if you regularly do longer journeys.

With the MPV market now all but killed off by SUVs, buyers in need of multi-seat practicality have two options. The first is to buy a seven-seat SUV and deal with the compromises that a smaller body requires, or you choose a van-based model.

But now, there’s a third alternative. The Volkswagen Multivan is an MPV from the German brand’s commercial vehicles division that won’t get a van equivalent. It replaces the Caravelle, and under the skin is a platform using MQB underpinnings, so plug-in hybrid drive is also available.

The exterior is definitely a talking point. It’s a clear marker between the old Caravelle and electric ID.Buzz due later this year, and while that silver and metallic orange scheme won’t be to all tastes, it does get you plenty of double takes.

The major attraction of any van-based MPV is versatility, and the Multivan combines this with the premium appeal of VW’s passenger cars. The upright dashboard uses tech from the Golf and Passat, with digital dials and VW’s latest infotainment. This looks great, but the tricky menu system and touch-sensitive controls are still frustrating to use.

There are two captain’s chairs up front and a second pair in the row behind, while the rear bench completes a 2-2-3 layout. Access to the back is simple via the large electric-sliding doors, and while the tailgate is massive, electric operation for this too means it’s a breeze to open or close.

Three pairs of floor rails allow you to slide all the seats back and forth, and a table between the middle-row seats can be moved all the way forward between the front seats to create a vast central storage area.

The middle chairs rotate through 180 degrees, and the rear bench comprises three separate seats. In past models these were very heavy, but the ones in the Multivan are easier to move. When they’re all out, there’s a van-like 3,672 litres of space on offer.

The Multivan is more accomplished as a people mover, though, and plug-in hybrid drive enhances its comfort. It’s the same system used in the Passat GTE, so there’s a 1.4 TSI petrol engine and an electric motor for a combined 215bhp, while a 13kWh battery offers a potential 30 miles of range.

During our time with the Multivan, the most we saw from a full charge was 25 miles, and if you rely on the petrol engine alone, economy of around 42mpg can be expected. The transmission is smooth, and helps the Multivan deliver better responses than its Caravelle predecessor, and the electric motor helps it to sprint off the line.

Even better is the fact that the switch between electric drive and the engine is barely perceptible, with no jerkiness and not much more noise from under the bonnet, either. That MQB architecture has done wonders for handling, too, and the Multivan is surprisingly agile for its size. There’s a fast turn-in and a lightness that seems at odds with the car’s dimensions, but you’re still conscious that this is a tall machine as it leans in corners on its soft suspension.

The ride is comfortable most of the time, but the cabin can act as an echo chamber that amplifies road noise from rougher surfaces, while big bumps send shudders through the car’s frame, too. Cruising is where the VW comes into its own, though, with those comfortable chairs and space to stretch out making for a relaxing experience. 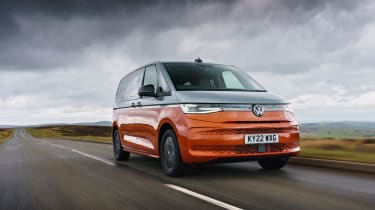 When it comes to naming and shaming car manufacturers and others for [..]