The current Octavia won our coveted Car of the Year award in 2020 but despite this, Skoda is working on a refreshed version for next year. It’s the first time we’ve seen the facelifted fourth-generation model testing and we’ve caught it in both hatchback and estate form.

It looks like the updated Octavia will retain much of the same styling as the pre-facelift model. The hatchback model we’ve spied looks like a higher specification than the estate and we can see a different lower grille with side air intakes in the same vein as the hot vRS models.

The larger alloy wheels, red brake calipers and black door mirrors also point towards a more sportier variant. The rear is entirely covered by camouflage but it looks like it will have new rear lights, and a revised rear bumper and spoiler.

The estate model features a new front bumper and headlight design as well as smaller alloy wheels and body-coloured door mirrors. There’s more camouflage to the rear, but with a simpler rear bumper design to the hatch. 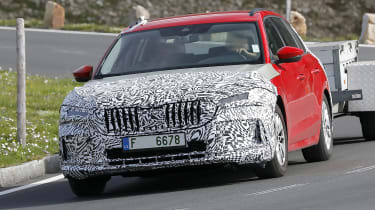 Underpinning the new Skoda Octavia will be the same MQB Evo platform as the current car, so we can expect the same range of powertrains to feature. Kicking off will be the 108bhp, 1.0-litre petrol three-cylinder engine, then the 1.0-litre mild-hybrid version of that unit which will come with a seven-speed DSG automatic transmission. Above those there’s the 1.5-litre TSI petrol with 148bhp, which is also available as a mild hybrid.

Skoda is likely to retain the selection of 2.0-litre turbocharged diesel powertrains, made up of 114bhp, 148bhp and 197bhp versions. Then there’s the 2.0-litre petrol engine and the 1.4-litre petrol with plug-in hybrid technology – both come with 242bhp. Four-wheel drive should again be available on some of the more powerful models.

We expect the Octavia to retain its infotainment system, made up of a central 10-inch touchscreen set-up with sat-nav, Android Auto and wireless Apple CarPlay and a 10-inch driver’s display screen. Boot space isn’t likely to change, with the non-plug-in hybrid estate models offering a decent 640 litres with the rear seats up and 1,700 litres with them folded down.

The facelifted Octavia should be fully revealed later this year, ahead of an expected launch in early 2023. Pricing is yet to be announced but there’s likely to be a small increase on the current model’s £23,335 starting price.