This is painful to report but we’re not convinced the Artura is ready to go on sale just yet. The car itself is terrific to drive, mostly. It’s fast and exciting and has an excellent new cabin, even if it might be a touch clinical emotionally. But we experienced several reliability issues with our test car on the launch event – and we were not the only ones to do so.

Given that deliveries will start next month this is not good news, neither for McLaren nor its customers. The potential for greatness clearly lurks within the recipe, but it needs more time proving to deliver on its potential. Until then, the Artura is a hard car to recommend when the competition at this level is so fierce.

The Artura matters for McLaren. A lot. Its new carbon fibre platform and twin-turbo V6 hybrid powertrain will form the basis for pretty much all McLarens for the next decade, so it can’t really afford to put a foot wrong. Hence the reason its original launch was postponed from late last year until now, some eight months later, thereby allowing Ferrari to launch its own V6 hybrid – the 296 GTB – to such acclaim in the meantime.

But that’s how vital the Artura is to McLaren’s future, so the fact that we’ve now driven it in near-production form on its international launch and experienced numerous technical issues with it – some minor, some not – does seem hard to excuse. For all its speed, drama and dynamic capability, we’re not sure it’s ready just yet, not until there’s clear evidence that the technical issues it continues to suffer from have been resolved. This is not a nice thing to say about any new car, let alone one on which the future of a British car company is so obviously hinged.

Anyway, having said all that, there are no such things as problems, they say, only solutions, and with this in mind, what’s the car itself like to drive? In many ways it’s excellent, in some ways it’s mildly disappointing, but overall, it’s very good indeed. Even if it does fall a yard or two short of matching a Ferrari 296 GTB, which to be fair costs £100k more than the £189,200 Artura.

In isolation there is much to be impressed by with the Artura. Its twin-turbo V6 engine develops a combined 671bhp and 720Nm of torque once the 94bhp and 225Nm of electric power has been factored in. That’s enough to fire it to 62mph in a claimed 3.0 seconds and to a top speed of 205mph, so it’s more than just quick, it’s ballistic.

This is partly because McLaren has managed to keep the kerb weight down to just 1,498kg, which is deeply impressive for a car that carries 130kg of battery and an e-motor. 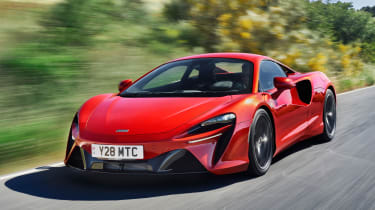 In simple terms, the Artura effectively replaces the company’s most popular model, the 570S, occupying the expansive chunk of real estate that exists both dynamically and financially between the GT and the720S. As such, McLaren claims it heralds “a new era” for the company, hence there’s also a great new design theme to the interior with much more intuitive instruments, new seats, a cleaner layout for all the major controls and a far less complex (but better to use) central touchscreen.

All the drive mode buttons are now up at fingertip level on either side of the wheel, just above where the gear shift paddles sit, although unlike the paddle shifters themselves, these new buttons don’t move when you twirl the wheel.

Either way, it feels like a more serious and higher quality car inside than any previous McLaren. This sits well with the equally significant increases in both ride and noise refinement on the move. The same goes for the new powertrain, which is probably quieter than you’d expect (or perhaps want) but still deeply entertaining to listen to if you give it some revs. And boy does it like to rev, the red line set at 8,500rpm, at which point the engine still feels and sounds remarkably smooth and unstressed.

On the move, the Artura feels extremely grown up and capable, perhaps even a touch too grown up for its own good. It’s refined to the point of feeling slightly aloof emotionally to begin with, although again the harder you drive it, the better it gets. And on a track, so long as you turn all its numerous new electronic aids off and summon the courage to start flinging it around a bit, the Artura does come alive beneath your backside and fingertips. At which point the potential that lurks within this car dynamically is released, and it all begins to make perfect sense.

The brakes, steering, gearchange and handling also go to another level once you push to unlock them on a track, although on the road there’s nothing actively wrong with the way the Artura stops, steers, changes gear or goes round corners. It feels like it is on rails for most of the time, to be honest, it’s that well composed.

Yet until you push it close to the edge, the contents of its dynamic envelope remain a well-guarded secret for much of the time, which can be a bit frustrating to begin with. It’s a bit like the “shy but interesting” supercar in this respect: thoroughly intriguing in isolation but harder to be won over by in a broader sense when the room is full of warmer, more outgoing but equally interesting alternatives.

Yet however good or great it may be to drive, this is not the Artura’s main issue at the moment. Reliability, on the other hand, is – and until this gets resolved the quality of its dynamics are of little consequence. Over to you McLaren.