A UK drive in a Kia Niro EV pre-production prototype confirms some concerns we had about the ride during an earlier test, and we’re still unsure that the range-topping ‘4’ trim is the derivative to go for. It’s an impressive and practical electric car overall, though, and highly efficient.

The arrival of an all-new Kia Niro EV is big news. The old e-Niro (note the name change for the new one) was Britain’s second best-selling EV in 2021, and its successor is expected to make up about half of overall Niro sales.

However, the EV market is significantly more crowded than it was when the e-Niro was launched in 2018, and even since the car came close to topping the UK’s EV sales charts in 2021. This new version is vital for Kia keeping up this momentum, but is it any good?

Certainly, in the looks department, it’s a big improvement over its somewhat bland predecessor. Here, we have a front end that owes much to the larger Sportage, but with a cleaner look overall. The LED headlamps feature unusual-shaped daytime running lights that are said to be inspired by the way an ECG displays a heartbeat.

At the back of the car, meanwhile, there are two huge panels covering the C-pillars. As standard, they’re body-coloured, but it’s possible to have these side ‘blades’ finished in either Steel Grey or Black Pearl – a £150 option for cars with regular paintwork, or £745 if you’ve selected one of the fancier premium colours. There’s a certain first-generation Audi R8 vibe to cars that have the two-tone look, which works better in the metal than you might imagine. The panels serve a functional purpose, too – they’re ducted, channelling air from the sides of the car to a series of vents by the boomerang-style rear headlights.

The body is 65mm longer than the outgoing Niro’s, while the wheelbase has been stretched by about 20mm. However, since this is an electric car built on a platform that needs to house hybrid and plug-in hybrid powertrains too, you don’t get quite the same sense of interior airiness found in ground-up developed EVs like Kia’s own EV6.

Even without a flat floor, though, the Niro EV feels plenty roomy inside, and there’s an abundance of legroom in the back even for taller passengers. The boot meanwhile has grown from 451 to 475 litres, and there’s now a front luggage compartment or – to borrow a phrase from the USA – a ‘frunk’. It offers only a modest 20 litres, but it could be a handy and more accessible place to store the charge cables if the boot is full for a weekend away.

The dash represents a decent step forward from the old Niro, with a sharp-looking design featuring a 10.25-inch digital instrument cluster and an identically-sized infotainment screen arrangement housed in a single unit. Again, there’s a clear link to the Sportage here, and to the larger Sorento. 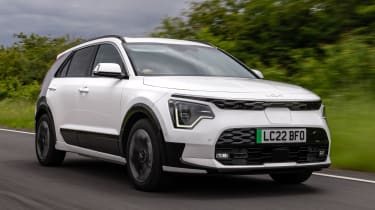 There’s an interesting blend of finishes and materials in here, and the quality feels good overall, despite this being an earlier pre-production prototype at about the same stage of development as the car we drove in Oslo a few months ago. Like that vehicle, it’s also in the top-spec ‘4’ trim grade, which adds a head-up display, a powered boot lid, an electric sunroof, a Harman Kardon sound system, heated rear seats and much more besides.

This model weighs in at a hefty £40,495, some £5,500 more than the entry-level Niro EV 2 and not far off the starting point for the Kia EV6. The £37,745 EV 3 might be a better compromise, with an impressive standard kit list including 18-inch wheels, a bigger infotainment touchscreen, faux leather upholstery and a ‘Vehicle-to-Device’ function (formerly ‘Vehicle-to-Load’, another curious name change) with a three-pin plug for powering devices including laptops. You do, however, lose the big digital instrument cluster and get a 4.2-inch TFT display instead.

The Niro EV is only available with one powertrain specification, combining a 201bhp, 255Nm front axle-mounted motor with a 64.8kWh battery pack. This makes for a brisk 0-62mph time of 7.8 seconds, and a range of up to 285 miles. Thanks to an 80kW DC charging capability the Niro EV’s battery can go from a 10 to 80 per cent charge in 45 minutes, nine minutes faster than before. Some rivals can accept higher charge rates, though – a Peugeot e-2008 caps out at 100kW, while the new Smart #1 is good for up to 150kW.

The straight-line performance will be more than fast enough for most, without catching those unused to the instant torque delivery of electric motors off guard – there’s a noticeable delay when getting on the throttle, which is present (albeit shortened) even in Sport mode.

What happens when you lift off again depends upon the regeneration mode selected. There are four to choose from using the kind of steering-wheel mounted paddles usually associated with automatic gearbox changes – the first two give an only just perceptible braking sensation off-throttle, while the third provides a good balance. The fourth activates the ‘I-Pedal’ one-pedal driving mode.

The absence of a combustion engine gives any noise, vibration and harshness (NVH) issues nowhere to hide, but the Niro EV is well-sorted in this regard, being nicely hushed even at higher speeds. The damping could be better resolved, though – the suspension soaks up bigger bumps well, and is very rarely harsh, but the ride can be quite busy at times.

The payoff is a reasonably sporty attitude through corners, with the Niro EV being surprisingly good fun on a twisty road. There is some body roll, but not an unacceptable amount, and the well-weighted and consistent steering satisfies. Traction in the dry from the front end is supplied in abundance, meanwhile.

That said, you do feel the Niro EV’s hefty weight figure in tighter bends. It tips the scales at nearly 1,750kg, carrying a quarter tonne more mass than the hybrid Niro, and about 150kg more than the PHEV.

In any case, what’s more important to the average Niro EV driver is the efficiency, and just like the car it replaces, the 2022 version scores well here. During our day of testing, which included a lot of less than sympathetic driving, we managed 3.9 miles per kWh. This means with a little more care, it should be easy enough to match or even beat that official 285-mile range figure.