While pitched as a family-friendly crossover, the Kia EV6 will become one of the fastest electric cars on sale in the form of the range-topping GT model. Goodwood’s Festival of Speed will mark the first dynamic debut for the car, where it’ll showcase its speed up the hill climb route.

Between its drives up the 1.16-mile hill climb, the GT will be on static display at the ‘First Glance Paddock’ for the attendees to get a closer look.

Kia calls the EV6 GT an ‘all-electric high-performance crossover’, which sounds accurate given its two electric motors combine for an output of 577bhp and 740Nm of torque. Power is sent to all four wheels, giving the GT a Porsche Taycan-baiting 3.5-second 0-62mph time. Top speed also stands at an impressive 162mph.

Sitting on the new E-GMP platform, which is shared with the Ioniq 5, there’s 800-volt electrical architecture which will allow the EV6 to recharge from 10 to 80 per cent in around 18 minutes. Maximum DC rapid charging capability should be over 220kW.

Albert Biermann, President and Head of Research and Development for Hyundai, outlined the Kia EV6 GT’s brief, saying: “The GT version of EV6 demonstrates our technological leadership through its combination of outstanding high-speed charging and acceleration performance like a super sports car. With our dedicated EV platform, there is no need for compromise between inspiring spaciousness and performance.”

The Kia EV6’s wheelbase is 2,900mm long despite the EV6’s relatively compact dimensions, pushing the wheels close to the model’s extremities to maximise space inside. The approach to efficiency continues inside the cabin, as the slim, lightweight seats are trimmed in fabric made from recycled plastics, equivalent to 111 water bottles. The GT-Line S car’s heavy panoramic sunroof is also removed.

Due to the extra electric motor, front luggage space shrinks 20 litres to 32 litres, but rear boot space still stands at 520 litres, rising to 1,300 litres with the rear seats folded down. Kia claims that with more than 35 percent charge left in the battery, the EV6 can also tow loads weighing up to 1,600kg, which is strong for an electric car.

On top of this, the EV6 features a heat pump that scavenges waste heat from the car’s coolant system; it means that even in temperatures as low as -7C the car can achieve 80 per cent of its claimed range possible at 25C ambient temperature. 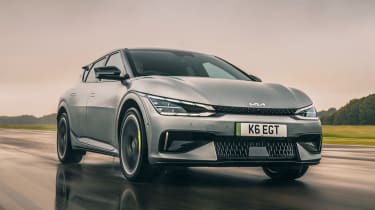 The EV6 GT is available to order now with customer delivery expected in the second half of the year, pricing starts from £59,995.

There’s something about a swerve at 250km/h (155mph) that tends to focus the mind. But as Albert Biermann, Kia’s Executive Technical Advisor, gives the steering wheel a violent waggle to demonstrate the body control of the forthcoming EV6 GT, he still manages to keep talking. And complaining. “Awful traffic,” he says. “We’re never going to see 260 if this carries on.”

Sure enough, the traffic on the motorways near Frankfurt is building up in a decidedly unfriendly fashion by the time we jump into the front passenger seat of Kia’s new flagship. The twin-motor EV produces a whopping 577bhp and 740Nm of torque – enough for a 0-62mph time of just 3.5 seconds and a top speed of 162mph (260km/h). But as we pull out of a basement garage at Kia’s HQ, Biermann is quick to point out the positioning that he and his engineering team have been aiming for with the new model.

“The idea with this car is for it to be a fast car, but not necessarily a true high-performance model,” he says. “That sounds strange, I suppose, but my definition is that a fast car is, well, fast, while a performance car is one that can do lap after lap at a race track. That’s not what the EV6 GT is about; the clue is in the name. It’s a fast grand tourer.” With that in mind, it’s a little odd to see a drift mode within the car’s system’s – but Biermann explains that you’ll need to go through a six or seven-step process to access it.

And sure enough, the initial feeling through the seat bases is not of a car whose suspension has been made ultra-stiff to allow its 2.2 tonnes to be thrown around the Nordschleife. It’s surprisingly compliant, in fact, considering that it’s on 21-inch alloys.

We finally reach the motorway and Biermann’s patience, which has been sorely tested, is rewarded with a stretch of (relatively) clear road. He stamps on the right-hand pedal. There’s the same sort of punch in the kidneys that you get with the fastest EVs – let’s say it sits between a Tesla Model S and a Model 3, as the numbers would suggest – but then it carries on. “This is what I’m particularly proud of,” Biermann says. “A fast GT has to be able to be comfortable, and quick to accelerate, but also to go more than 100mph where the rules allow it.”

The rolling refinement starts to take a hit as the speedo fairly races beyond 160km/h. There’s a minimum of motor noise, but tyre roar from the fairly porous autobahn road surface becomes noticeable. Then as we head towards 200km/h, the inevitable wind rush from the A-pillars and side mirrors takes over.

We’re still able to talk, mind. Or at least, Biermann is. He’s enthusing about how all of the technology in the car has been developed in house – then giving the aforementioned lane switch to demonstrate that while we’re being isolated from the worst road scars, the EV6 GT still remains tied down at speed. And it does, even when Biermann plays with the car’s settings to invoke the most aggressive motor response while keeping the suspension in its most comfortable setting. We can see how, with the right charging network allowing you to exploit the 220kW-plus DC rates, this would be a devastatingly effective zero-emissions cross-country tool. No, we don’t hit 260km/h – but we’ve little doubt that had road conditions allowed it, we could have done.

This is an early test, we know. But there was always a risk that the EV6 – which is a firmer-riding machine in standard form than its E-GMP sister, the Hyundai Ioniq 5 – could have become a bit of an uncouth hotrod in its most extreme expression so far. It’s reassuring to hear the man in charge of the development team say that he’s tried to avoid that. And on the basis of this short run, he’s on course to succeed.

Check out the latest Kia news and reviews here…