Practical, stylish, engaging to drive, well equipped and frugal, the HR-V is one of the highlights of the Honda range. Our top-spec car is pricey, but the HR-V has a premium feel inside and out.

Pearlescent paintwork isn’t something I’d expect to consider when choosing a car spec, but the funky white finish on our new Honda HR-V hybrid shows off this practical and sporty SUV’s lines to great effect. Flip-flopping between a pleasingly blingy sparkle in the sunshine to cool grey-ish tones in the shade, the paint job helps give it a premium look, I feel.

The HR-V is already styled to project a strong sense of dynamism, via crisply cut lines that feature a full-length shoulder crease from nose to tail-lights, as well as a rakish ‘coupé’ rear profile. It’s especially dramatic in our top-spec Advance Style trim, with its contrasting black roof, smoked rear lights and what Honda refers to as ‘playful colour accents’ – a.k.a. orange strips on the door sills, and small red, white and blue flashes in the body-coloured grille. The latter are Honda Racing colours by the way, and not the company’s tribute to Her Majesty the Queen in her jubilee year.

Not that the Queen wouldn’t enjoy the VIP treatment in our new Honda, which despite its relatively compact size offers acres of rear legroom. At six feet four inches, even I can sit comfortably behind the driver’s seat when it’s pushed back fully.

But the trade-off from the rakish rear is felt in the boot. There’s plenty of room for luggage or shopping, but headroom back there for Lotte, our Large Munsterlander dog, is marginal, although the screen rake wouldn’t be an issue for Corgi-sized canines. It’s great to find wipe-clean plastic boot sides and a removable boot tray back there, too, instead of the carpeted dog-hair magnet in the Renault Captur I was living with previously. An extra unexpected benefit of that sloping rear screen is that it’s deep enough to warrant a proper-sized wiper.

Many small crossovers make you peer out of a mucky rear window through a virtual porthole, but not this one, even though the HR-V’s rear-view camera makes light work of reversing.

We’ve got a few months ahead to get to grips properly with our new Honda, but having spent the past six months mostly driving the aforementioned Captur, I’m immediately enjoying the Honda’s crisper handling and its sharper style. The car’s early fuel economy figures look promising, too, because I’m typically bettering 58mpg on local routes with the electrified HR-V.

The secret of the Honda’s parsimonious ways is its impressive hybrid powertrain, which is a 1.5-litre four-cylinder petrol engine with two electric motors that offer a not-quite-mighty 106bhp. That said, it’s certainly eager enough on the road, at least by family SUV standards.

Its responsive steering and roll-free cornering make the HR-V feel like a sports car compared with the relatively wallowy Captur. It rides softly and smoothly, but with a better sense of composure than the Renault through corners, which I found to be comfortable but far from engaging when pressed. The difference in feel is notable and welcome, and the Honda is actually quite fun to drive, as befits its styling and marketing aspirations.

The Japanese firm is definitely out to attract a more sporty audience than the somewhat matronly Captur, which is evidenced by Honda’s sponsorship of English Rugby and a rather random video on the company website of Formula One ace Max Verstappen driving an HR-V without passing any comment on it at all.

Although I’ll never lead the England rugby team into battle, it’s nice to know a suitably wrapped HR-V provides an escort service for the team bus on big match days.

We bumped into an England team-liveried HR-V at Honda’s fleet garage in Bracknell, where we went to collect our own car, which had already racked-up more than 7,000 miles on the company’s demo fleet before our extended test began. That’s probably the best part of a year’s motoring for many Honda drivers, but aside from the odometer reading, it feels like a brand-new car. Whether that’s a credit to the car or the team at the Honda press garage I’m not entirely sure, but I’m guessing a bit of both! 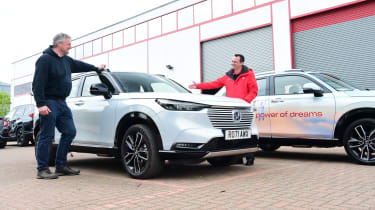