Sony Honda Mobility Inc is the new company name of the joint venture of electronics brand Sony and car manufacturer Honda. The two Japanese giants have officially agreed a deal to form a new company that will focus on developing and selling electric vehicles in the future, with the first cars from the partnership set to go on sale in 2025.

The plan for the new company, due to be established in 2022, is to “engage in the joint development and sales of high value-added battery electric vehicles and commercialise them in conjunction with providing mobility services”.

The confirmation of the arrangement outlines that the new company is expected to plan, design, develop and sell EVs, with Honda’s expertise in production meaning it will manufacture the vehicles. Sony will bring to the table digital services for a future mobility platform.

The news follows Sony’s announcement at the start of 2022 that it intends to become an electric car brand, having shown its Vision S 02 concept at the Consumer Electronics Show in Las Vegas. 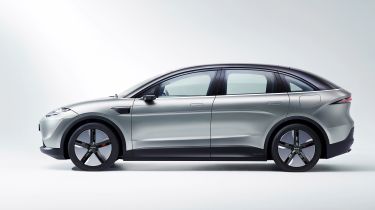 The seven-seat, 4.85-metre-long prototype SUV is powered by a pair of electric motors for a total of 563bhp, offering a 0-62mph time of less than five seconds. Battery technology, size and a predicted range were not disclosed when Sony revealed the Vision S 02, alongside forming a new company, called Sony Mobility Inc.

Images of the Vision S 02’s interior revealed similar design cues to the brand’s original Vision-S concept, with a full-width high-definition display instead of a conventional fascia, and headrest screens for second-row passengers. There’s also a rotary dial in the middle of the third row – potentially allowing those in the sixth and seventh seats to control audio or multimedia functions.

Commenting on the announcement of the new company, Toshihiro Mibe, Director, President, Representative Executive Officer and CEO of Honda Motor Co. said, “We are very pleased to have signed a joint venture agreement with Sony, which has strengths in advanced digital technology, and shares our desire to take on new challenges.”

Kenichiro Yoshida, CEO of Sony added, “We are excited to have met a partner, Honda, with extensive global achievements and knowledge, and to sign the joint venture agreement between the two companies. Going forward, we aim to contribute to the evolution of mobility by combining Honda’s cutting-edge environmental and safety technologies, mobility development capabilities, vehicle body manufacturing technology and after-sales service management experience, with our expertise in imaging, sensing, telecommunication, network and entertainment technologies.”