All-electric Fisker Ocean to debut at Goodwood Festival of Speed

American EV company Fisker has confirmed it will launch its Ocean SUV in the UK in early 2023 and potential buyers will be able to get up close and personal with the Tesla Model Y rival at this year’s Goodwood Festival of Speed. The Ocean will be on display at the festival’s ‘Electric Avenue’ area – designed specifically to accommodate electric vehicles.

Fisker also confirmed that the Ocean will go on sale here in the middle of 2023. It will be offered exclusively through a subscription service managed by Onto for the first 12 months of UK availability.

The brand plans to supply Onto with up to 700 Ocean SUVs that can be accessed by customers via an all-inclusive monthly payment, similar to the fully-comprehensive subscription Audi offers via Onto for the e-tron SUV. Insurance, public charging and servicing are all included.

UK pricing for the new Fisker Ocean electric SUV has also been revealed. CEO Henrik Fisker previously revealed details exclusively to Auto Express and we can now confirm that the car is on sale from £34,990. It’s a small increase over Fisker’s original indicated price for the entry-level five-seat Sport model, but it offers an estimated WLTP range of 275 miles.

Prices rise to £48,900 for the mid-spec all-wheel drive Ultra car, which offers a claimed 379-mile range. The brand’s higher-spec, big-battery Ocean Extreme will cost £59,900, with Fisker indicating that a range of up to 390 miles on a full charge will be possible according to WLTP estimates.

Deliveries will begin shortly after production starts at Magna’s factory in Graz, Austria (Fisker is outsourcing production) in November this year.

The first 5,000 cars built will be in a full bells and whistles spec, badged as Fisker Ocean One, priced from £59,900 and offering the same vital stats as the Extreme model. They’re fitted with special 22-inch wheels and a commemorative digital signature to differentiate these special-run models.

When it comes to the car’s dimensions, Fisker told us: “It’s 4,780mm long, which, to put in context, it’s about the same length as the BMW X3 or the Tesla Model Y. The wheelbase is 2,920mm – it’s pretty long, but that’s because we also have a lot of space for batteries. I mean, we have the longest battery range in the world in our price class.”

“The Ocean may be an SUV, but it drives like a sports car,” Fisker added. “It’s got the handling because it’s got torque vectoring, but it’s also got instant torque.”

The car’s 0-60mph times bear that out, with the 271bhp Sport model covering the sprint in 6.9 seconds, the 533bhp all-wheel drive Ultra version in 3.9 seconds and the Extreme model getting from 0-60 in 3.6 seconds thanks to a total of 543bhp. “It’s better than a Ferrari,” said Fisker.

The Ocean has two different battery chemistries for its two-wheel drive and four-wheel drive cars. Ocean Sports will use lithium-ion phosphate battery-cell chemistry, while Ocean Ultra and Ocean Extreme cars will use battery packs with a nickel-manganese-cobalt cell chemistry. All batteries are being supplied by CATL, with the different technologies being used to keep the price of the Sport model as low as possible and give the Ultra and Extreme cars what Fisker describes as “segment-leading range and performance”.

Fisker wouldn’t be drawn on actual battery sizes but did admit that the battery in the Ultra and Extreme models – called the ‘Hyper Range’ battery pack – was “much bigger” than 80kWh. The standard battery pack in the Sport model is called the ‘Touring Range’.

Customers lucky enough to live in sunny climates can also take advantage of the Fisker SolarSky roof – a full-length opening roof that also incorporates enough solar panels to potentially add up to 2,000 miles of range every year.

Another stand-out feature of the Ocean that’s likely to be of more use to UK buyers is the 17.1-inch Revolve infotainment screen. When driving, the display will sit in portrait Control mode, but when the car’s parked the screen can be flipped through 90 degrees into landscape Hollywood mode to allow users to watch movies. Standard over-the-air updates will also keep the infotainment up to date and potentially improve efficiency, performance and other features.

As a former designer with a CV includes brands like Aston Martin and BMW, Fisker was responsible for the look of the Ocean which, with its pumped-up wheel arches, looks surprisingly athletic. “I did the first sketch, and I did the first clay model,” Fisker told us. “Then it got handed over to the design team and we worked together. We’ve got two female lead designers, the exterior designer is female and the interior designer is female.”

“We wanted to combine the sports car idea with an SUV and say, ‘We know you want the utility, but you really want a sports car. How can we combine these two into one product?’

“It’s an SUV, but I wanted to make it almost feel like a sports car SUV,” said Fisker. “That’s why it’s got a lot of sculpture around the wheels. It sits really well on the road; it’s got a wide track, which also is good for handling.

“We have super-thin modern lights, both front and rear. We did a lot with the aerodynamics, too, and it’s got a totally flat floor.”

Some of the design features had an eye on keeping the price low, too, like the bonnet. “How do we make a car that’s $37,500 and desirable? We had to make some decisions.

The inside is designed with sustainability in mind, with the seat fabric made from recycled T-shirts and the flooring from recycled plastic bottles. “We wanted to make a luxurious interior, something different. For example, if you look at the front seats, they don’t have any seams. We’ve used a whole new type of technology, it’s called freeform, which we worked on to make it really luxurious and super modern.

“The whole idea was to do a clean, luxurious interior. Yes, it’s simple, but it still feels luxurious.” 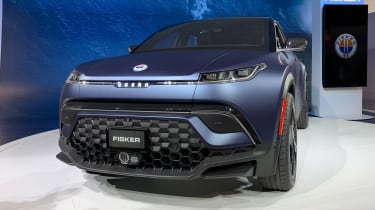 A slim digital display sits behind a two spoke steering wheel, while the rest of the cabin is pretty much as minimalist as a Tesla’s but for some buttons below the infotainment screen to control the heating and ventilation system.

Sitting inside reveals plenty of head and legroom in the front and the back, with good access, too. Rear space is boosted by a floating centre console that lets you put your feet underneath.

Although there are no capacity figures for the boot yet, it’s big enough to take a couple more seats, as Fisker explained. “We may come out with a third row, so we’d move this [second] row a little bit forward and put a third row in.”

The back window will also lower to allow longer loads to be carried, while all glass apart from the windscreen can be opened in California mode, explaining the kink in the window line above the rear wheel arch, allowing the rearmost side windows to be lowered.

When the car finally reaches the UK, it won’t be sold through dealers, instead it can be bought or leased online, while there will be Fisker experience centres dotted around the country with the first rumoured to be in the Westfield shopping centre in West London. The brand’s first European centre is under construction in Munich, Germany.

In addition, there will be a number of distribution centres that will also take care of servicing. “Distribution centres will be outside the city where you can go out and pick up your car or you can get the car delivered to your home,” Fisker told us.

The Ocean is only the start of the Fisker story, though, with the second model, the smaller Fisker Pear SUV, already in development and coming a year later. It’s set to be built by Foxconn, the company that makes Apple iPhones and other tech products.

Then there will be two more expensive models, straddling the £100,000 mark, developed in the UK by the recently announced Fisker Magic Works, which will be set up and run by former Aston Martin man David King.

“What’s unique about the UK is that they have a whole talent pool of people who have specialised in these specialty vehicles,” said Fisker. “You’ve got McLaren, Aston, Rolls-Royce, Bentley, and then all the little companies like Ariel. Then you’ve got Formula 1 racing centred in England – there’s a lot of expertise there.

“Nobody’s really talking to the current enthusiasts and where they are with EVs. Who’s going to get them first? I want to be the one getting them first.

“We have to make some vehicles that truly appeal to the current enthusiast. And I think that’s not just in design or making another two-seater mid-engine sports car, which some people have done. I think it’s about how do you create this emotional relationship with the automobile? That’s something that we’re going to work on with Magic Works.”

Fisker says the Ocean has been designed to be as sustainable as possible. The car’s seats are trimmed using recycled polyester fibres, while its interior carpets are made from recycled nylon, sourced from abandoned fishing nets.

The Ocean’s roof also features a solar panel, which drip-feeds the SUV’s battery pack. Fisker says it will utilise the discarded rubber waste from tyre production for several components in the Ocean, which prevents the offcuts from going to landfill and ultimately lowers the SUV’s carbon footprint.

To save money and weight, the Ocean’s bonnet has been fixed shut. The space gained under the nose houses the SUV’s electronics and a next-generation, ultra-efficient air-conditioning unit, which Fisker says increases the amount of available cabin space.

The Ocean is based on Fisker’s new FM29 platform, which has enough space over the rear axle for a third seating row. The company says the cabin has been designed to seat five adults, though.

Buyers will get a 9.8-inch digital instrument cluster, a head-up display and an enormous 17.1-inch infotainment system, which offers support for Apple CarPlay and Android Auto. Fisker also says it plans to include an augmented reality navigation system, although the specifics of the hardware are yet to be confirmed.

Ultra trim boasts a 360-degree surround view monitor and upgraded AEB alongside an extra driving mode, called Hyper. This is on top of the Earth and Fun modes offered on Sport trim.

The Ocean will also come with a range of practical extras, including a tow-bar, roof-rails and a retractable rear screen, which allows oversized items to be carried in the SUV’s boot without the need to leave the tailgate open.

Buyers will also benefit from a setting called “California Mode,” which lowers the SUV’s side and rear windows to provide what Fisker calls “open-air” atmosphere in the cabin. It’ll be fitted as standard across all of the car’s option packages, although it won’t be available on the base-model.

What does the Fisker Ocean have to beat? Check out our list of the best electric cars on sale now…