Limited edition Citroen My Ami Buggy is going on sale

The Citroen Ami line-up has a new member in the form of the My Ami Buggy: a beach buggy inspired version of the brand’s new two-seat all-electric quadricycle that’s available in very limited numbers in France – but it could come to Britain.

Just 50 units of the My Ami Buggy will be offered to French buyers, but a similar offering for the UK has been hinted at by Eurig Druce, Citroen UK’s managing director, who has said there is “every conceivable chance we could see future versions of My Ami Buggy on sale in the UK” if customer interest is there.

Based on the even tougher looking My Ami Buggy Concept revealed late last year, the production version retains several elements of the one-off show car. Though its stance and ride height revert to mirror those of the regular Ami.

The most obvious visual cue that you’re looking at the Buggy version is the removal of the Ami’s doors, in favour of metal tubing. A detachable soft-top also features – a nod to the Citroen Mehari – which can be rolled up and stored behind the two seats. The chunky off-road tyres of the concept version have been replaced though, with new 14-inch steel wheels finished in gold taking their place. 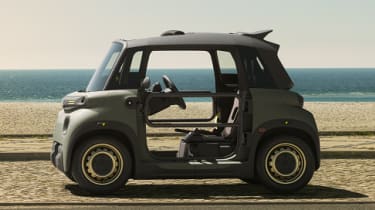 The production version does without a front bullbar and protective grilles for the lights, but the My Ami Buggy features extended black plastic wheel arches and black tinted front and rear protective skid plates.

The concept’s strong yellow interior scheme has been toned down, but many exterior and interior yellow touches remain, and the seats are trimmed in black material with contrasting yellow stitching.

No technical details or prices have been announced, but the model almost certainly uses the same powertrain as the regular Ami, utilising a 5.5kWh battery for a maximum range of 46 miles on a full charge, and a top speed of 28mph.

Do you prefer the Citroen Ami with or without the off-road add-ons? Let us know in the comments…