It’s been almost exactly a year since we had our first look at the new Dacia logo and now the budget car brand has revealed it in full, adorning its current model range. We initially thought the logo would appear first on the upcoming Bigster SUV but the latest set of images show it used on the Sandero, Sandero Stepway, Jogger, Duster and the Spring (which isn’t sold in the UK).

Replacing the old shield design Dacia badge, the new logo and brand identity is simply redesigned in white and has the word ‘Dacia’ in a stylised blocky font. On the front of the cars, the logo is reduced to just the D and C characters interlinked in a kind of chain motif at the centre of the grille.

At the rear of the cars Dacia has adorned the tailgates with the new Dacia lettering and inside we see the Dacia badge again on the steering wheel. The brand says the treatment “reflects the robust simplicity of the new design” it has created for its cars. 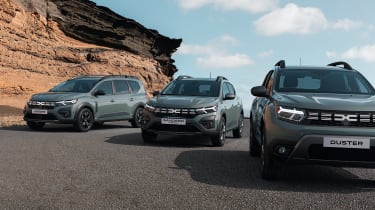 Dacia also says its new branding has been deliberately stripped back, as a reminder of its back- to-basics business model. Denis Le Vot, Dacia’s CEO, outlined the firm’s stance, saying: “[Dacia is] the brand that constantly redefines what is essential in the automotive industry.”

David Durand, Dacia Design Director commented on the new logo: “The streamlined logo is highly symbolic of the brand’s focus on getting back to basics. Similarly, the Dacia Link emblem evokes simplicity and robustness. It also carries the symbolism of the link, a strong element of the Dacia community.”

As part of the update that has introduced the new badge, the firm’s two SUVs, the Duster and Sandero Stepway, now feature Monolith Grey finish on the roof rails, the front and rear skid plates and the side-view mirrors. Orders for Dacia vehicles with the new logo open on 16 June and can expect to see them on UK roads later this year.

Check out the top 10 cheapest cars on sale here…