The all-new Peugeot 408 will be revealed on 22 June and official teaser shots confirm it’ll be a coupe-SUV. We’ve previously seen the French firm post a close-up of the car’s nose – showing the grille, badge and 408 badging – but now we have a much clearer view of Peugeot’s new family car.

We’ve previously seen spy shots of Peugeot developing a lifted saloon – in a similar style to the Polestar 2 – and these latest teasers confirm that the test car pictured was indeed the new 408.

The spy images of the mystery car show Peugeot’s ‘sabre-tooth’ daytime running lights, a lower roofline than the more traditional 3008 SUV, plus a sloping rear that gives it a sportier profile. The triple ‘claw’ rear lights seen on the rest of the brand’s line-up will almost certainly make an appearance too.

The new official images from Peugeot don’t reveal as much but do at least confirm we’ll see all of those Peugeot design traits on the 408. Unsurprisingly, it looks like the 408 will utilise Peugeot’s i-Cockpit cabin layout as well.

Peugeot has previously said its new 408 “combines characteristic codes of SUVs with a dynamic Fastback silhouette”. Omitting the 008 badge associated with Peugeot’s SUVs means the 408 will probably sit between the 308 hatchback and 508 saloon. The 408 should take styling cues from both cars, although the grille shown in the teaser image incorporates a new design. 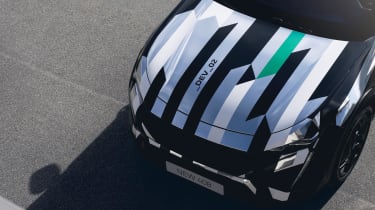 The use of plug-in hybrid powertrain for the 408 is almost a certainty. We can expect the 408 to offer the same 1.6-litre, four-cylinder hybrid petrol engines producing 178bhp or 222bhp found in the 308. If a Peugeot Sport Engineered model is in the works then that could get the 508 PSE’s 335bhp hybrid powertrain.

The 408 may not be limited to plug-in hybrid power, however, as it’ll use Stellantis’s modular EMP2 platform so we could see the 128bhp 1.2-litre petrol and 128bhp 1.5-litre diesel being used. As with the 308, it’s likely every powertrain will only be available with an eight-speed automatic transmission.

Given the Peugeot 308 will soon be offered with an all-electric e-308 variant,  there could also be an e-408 in the pipeline. In the 154bhp e-308 a 54kWh battery provides 250 miles of range – although the e-408’s extra size and weight will likely mean it won’t be able to travel quite as far. Even so, it should still provide healthy competition to entry-level versions of the Skoda Enyaq Coupe and Volkswagen ID.5.

We expect the upcoming 408 to provide competition to the Toyota C-HR, Renault Arkana and Volkswagen T-Roc, as well offering an alternative to the 508 and 3008 SUV in the brand’s range.

There’s no word on pricing yet but given it’ll be a larger and more fashionable offering than the 308, a starting price of around £35,000 seems likely.