Audi’s plug-in hybrid A6 Avant 50 TFSI e is a premium (and some might say pricey) PHEV that offers reasonable practicality, a refined powertrain and ride, plus good all-electric range. However, while the quality and technology are great here, the same is true of the rest of the A6 range. This plug-in hybrid doesn’t move the game on ahead of Audi’s upmarket rivals and only joins them on an equal footing, with the result that it also gets an equal rating to many of them.

If you want a premium plug-in hybrid with practicality, could Audi’s A6 Avant 50 TFSI e be for you? Given that this estate version of the German firm’s petrol-electric saloon offers broadly identical claimed efficiency and electric range to its sibling, but packs more space, it very well could be.

We’ll start with the tech that gives the A6 its eco credentials. The Avant 50 TFSI e packs a 17.9kWh battery (of which 14.4kWh is usable) into its body, which gives this sizeable machine a claimed all-electric range of up to 41 miles. During our test drive, we achieved mid-30s easily.

The electric motor is supported by a familiar 2.0-litre turbocharged four-cylinder petrol engine to produce a total output of 295bhp and 370Nm of torque.

Despite weighing a hefty 2,150kg (blame the battery for that), the A6 Avant plug-in is surprisingly rapid given its modest output, sprinting from 0-62mph in 6.3 seconds. Of course, flat-out acceleration isn’t what’s important here, and when you do try to access it, the petrol unit becomes more noticeable. Instead, much of that maximum torque is available low down to help performance, exactly where you need it. And it makes the Audi nicer to drive around town and on the motorway, with only small throttle inputs resulting in a pleasing, positive reaction from the motor.

Keep the A6 on electric power and it’s quiet and smooth. Even when the car’s brain manages both power sources, it does so with the minimum of fuss – assuming there’s sufficient charge remaining. Deplete the battery’s reserves, however, and things occasionally become a little clunkier. 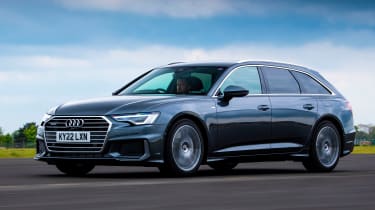 It’s a small price to pay, though, because the petrol-electric powertrain gives the potential for efficiency as impressive as 217mpg and 30g/km of CO2, says Audi.

Of course, as with any plug-in, you’ll have to do just that as frequently as possible to get the best economy, but even with one full charge and a long trip that included town and country driving – but also plenty of motorway miles – we easily saw 60mpg.

Hooked up to a 7kW charger, the battery should take around two hours and 30 minutes to charge, so even plugging in while you’re at the supermarket will yield some decent results when it comes to range gained and efficiency. Audi is also currently offering a promotion in conjunction with Octopus Energy that will see full EV or plug-in owners eligible for a £90 credit on their energy bill, which the brand claims could be worth up to 4,500 miles of driving, depending on the vehicle.

Our test car was in S line trim, but even with its 19-inch wheels and 10mm lower sports suspension, the ride was refined and reactions to potholes and bad bumps were damped nicely. However, there are drawbacks, one of which is boot space. Having to package the battery means load capacity drops from 565 litres in an ICE-powered A6 Avant to just 405 litres here. To put this into context, though, a BMW 530e Touring only offers 430 litres, so the drawbacks are sector-wide in PHEV estates.

Besides, this PHEV’s interior is just as good as in any other A6, so the quality of materials is fantastic. It’s comfortable, spacious and loaded with tech, too.