MG’s focus on all-electric vehicles is expanding from SUVs and hatchbacks to a new roadster – named the Cyberster. These patent images are our best look yet at the EV since we saw it in concept form last year.

It’s the first time we’ve seen a convertible from MG since the TF. It’s also the second pure-electric sports car concept launched by MG in the last few years, following on from the E-Motion Coupe that the SAIC-owned brand first revealed in 2017.

The production version in these patents looks like it’ll retain plenty of the design language seen in the concept. MG said it’s designed as a “nod to the MGB Roadster of yesteryear.”

At the front, the aggressive splitter has been toned down slightly, but there’s still a long, sloping bonnet that falls into a low grille. The concept’s ‘magic eye’ headlamps meanwhile have been swapped for some more conventional units. Finned side skirts are also carried over from the concept. Unlike the Cyberster concept, the folding roof is up and it looks to be a fairly traditional set-up – we’ll have to wait and see if the protective roll-over hoops are retained.

The rear features some outlandish brake light design with two arrows pointing outwards on the back. It’s safe to assume these will double up as the rear indicators, too. It’s a rather short rear end and at the bottom we can see the diffuser has shrunk.

Unfortunately, we don’t know what the inside of the Cyberster will look like, but the concept has given us some clue what to expect. That car’s cabin is divided by a narrow portrait infotainment screen mounted in the centre console, through which the driver can access the car’s various 5G services – given MG’s plan on using the tech in the MG4, we expect to see this appear in the Cyberster. The digital gauge cluster is also flanked by a further two screens, which take video feeds from a pair of wing-mounted cameras – the recent patent images suggest this will not make it to production.

The steering wheel is heavily sculpted and features a set of games controller-style buttons and triggers, although MG is yet to explain how the unit works. In its most recent announcement, the company also said the car has a pair of “zero-gravity sports seats.” 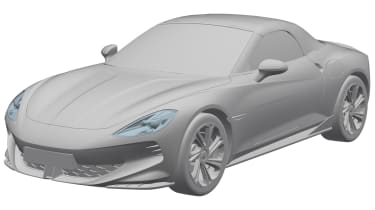 MG is yet to release full technical specification for the Cyberster, although the brand has confirmed that it’ll deliver a 0-62mph time of around three seconds and a maximum range of up to 800km, or around 500 miles. Figures like these would make the eventual production version a close rival for the second-generation Tesla Roadster.

This approach would be a radical shift away from MG’s current EV strategy. The ZS Electric SUV was the brand’s first all-electric offering, which served up a solid range figure at an affordable price, and that direction was followed more recently by the facelifted MG 5.

The Cyberster is certain to use a completely different electric drivetrain to MG’s production vehicles, potentially inheriting the same twin-motor four-wheel-drive system from the E-Motion concept, along with its modular electric vehicle platform.

MG hasn’t yet given the Cyberster the green light for production, but with patent images appearing, we’d hazard a guess it’s pretty close to testing.

Recent reports in Australian media cited a local market press release which suggested that MG would soon launch a new sub-brand, called MG Cyber. Allegedly, the spin-off is aiming to raise around £5.5m by offering early investors access to the car’s development process.

Those who sign up would be able to contribute to decisions on interior and exterior trim, colours and even the design of the EV’s user interface. They would also be offered the chance to drive early prototypes and potentially end up with unique Cybersters that are customised to their own tastes.

There’s little evidence that MG would be able to use this approach beyond its domestic market in China. The overall chances of the car making it to showrooms globally may also depend on MG Cyber’s success in attracting not just expressions of interest, but also serious cash investment.

Would you like to see an MG roadster back on sale in the UK? Tell us in the comments…