Czinger 21C to make first public appearance in the UK

American hypercar brand Czinger has announced the new 21C will be on display at the first Concours on Savile Row event, having secured a deal for H R Owen to be the official retailer of the hybrid hypercar.

The event will run from 15 to 16 June, with the 21C accompanying the Aston Martin DBX707,  Bentley Bacalar, and McLaren Artura as well as classic machinery such as the 1962 Facel Vega Facel II, 1965 Porsche 356C and 1924 Rolls-Royce Silver Ghost.

The Czinger 21C promises to be one of the fastest cars on sale, both in a straight line and around the track. Thanks to its 1,233bhp hybrid V8 powertrain and 1240kg dry-weight, it recently managed a production-car lap record around the Circuit of the Americas, beating the McLaren P1’s previous record by six seconds.

That’s not the only lap record the 21C has taken though, because it’s also broken the production car lap record at Laguna Seca Raceway. A storming time of 1:25.44 undercuts that of the previous record holder, the McLaren Senna, by 2.18 seconds.

American racing driver Joel Miller was behind the wheel for the record-breaking run, which was set using road-legal Michelin Pilot Sport Cup 2 R tyres and verified using GPS timing. The combination of a 1240kg dry-weight and a 1,233bhp hybrid powertrain made for a blistering lap time. In fact, Miller broke the record on two previous attempts, before setting his fastest lap.

Speaking on the upcoming hypercar, he said: “You can feel what the car is doing in the steering wheel. What the powertrain is capable of doing is absolutely mind-blowing at maximum power. When setting the record at Laguna Seca, it was not by a little bit but a massive amount!”

Ewan Baldry, Czinger’s Chief Engineer, has also hinted that future record attempts are in the pipeline. The American marque is set to showcase the record-setting C21 at Pebble Beach during this month’s Monterey Car Week.

Originally created to battle it out with the likes of the McLaren Speedtail and upcoming Aston Martin Valkyrie, the Czinger 21C stunned when it was revealed with its wild one-plus-one seating and fighter jet styling. But, in the pursuit of greater performance, its creators have prompted an entire redesign, with the final car to hit the road in 2023.

Czinger chief commercial officer Jens Sverdrup revealed to Auto Express earlier this year that in the transition from concept to production hypercar “almost everything changed” on the 21C.

So much is now different, says the senior exec, the American hypercar brand was forced to file at least another 100 patents for pioneering new tech, on top of the 350 already registered when developing last year’s concept.

The narrow concept has been widened for the production car to a generous 2050mm width (12mm wider than a Bugatti Chiron.) The unusual 1+1 driver-ahead-of passenger seating arrangement remains, but after three years of testing on both road and track, engineers wanted a wider tyre for more mid-corner grip. 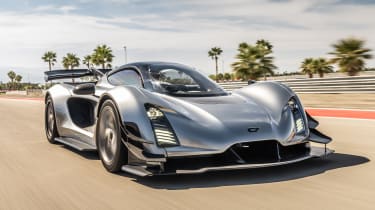 With this the 21C’s entire exterior has been redesigned. With a wider body, stylists and engineers could further optimise air-bending to significantly boost downforce.

With more room, an even more sophisticated suspension arrangement could be packaged, improving handling and, thanks to revised ‘active’ feature, the American hypercar can alter how high it rides benefiting downforce and handling even further.

What hasn’t changed is the car-maker’s novel ultra-lightweight aluminium-carbon-fibre chassis that ensure the 21C, even in production trim, still only tips the scales at a featherweight 1240kg (dry), providing the hallowed 1:1 power-to-weight ratio.

The engine is a twin-turbocharged 2.88-litre V8 unit that can run on eco-friendly, carbon-neutral bio-methanol fuel. Also, somewhat unusually for a startup company, the unit has been developed completely in-house. It has a redline of 11,000rpm – and generates 950bhp on its own.

It’s supported by a pair of 150bhp electric motors on the front axle, which offers a combined maximum output of 1233bhp. A new power kit will also be offered that adds an extra 100bhp, with the extra power generated from both the V8 and the hybrid’s electric motors. Czinger says it sourced the batteries for the hybrid system from an unnamed Formula 1 team. Up to 12 miles on electric power alone is possible.

Two fully homologated specifications will be available to customers, a lightweight high downforce configuration and a low drag configuration for top speed.

In low downforce trim top speed is now claimed to be 281mph, while 0-62mph remains 1.9 seconds. As for performance from launch to standstill, 0-186mph-0 takes 13.8 secs. Downforce has been raised to 615kg at 100mph and a mighty 2500kg at 200mph. If that somehow isn’t enough, Czinger says it will make an even more extreme version with an even more intensive aerodynamic package, although it won’t be road-legal.

With engineers making the final touches, Sverdrup said that his firm now has Bugatti in its sights when it comes to fit, finish and levels of build quality, with the engine bay now claimed to have been redesigned to resemble a Patek Philippe watch.

But, the lengthy homologation process to ensure the US hypercar is road legal on all global markets could delay first deliveries until early 2023. Pricing for the Czinger 21C is confirmed to be $2.05m (£1.5m) plus local taxes.

But, the lengthy homologation process to ensure the US hypercar is road legal on all global markets could delay first deliveries until early 2023. Just 80 examples of the $2.05m (£1.5m) 21C will be built.

What do you make of the Czinger 21C? Let us know in the comments section below…