When we spotted this new flavour of Ferrari SF90 testing back in May we thought it was an updated version of the hybrid supercar. However, these latest spy shots indicate some interesting changes over the regular car, suggesting we could be looking at a SF90 Versione Speciale.

The standard SF90 is codenamed F173 and Ferrari likes to denote the faster, more extreme versions of its road cars with ‘VS’ (short for Versione Speciale) throughout their prototype phase.

The camouflage covering this test car is more comprehensive than in previous spy shots, but that’s because it’s hiding new modifications. As before, we can see a larger, raised air duct on the front bonnet in a similar style to the so-called S-Duct found on the Ferrari 488 Pista supercar. This is a Formula One-derived technique of generating downforce, which works by channelling air through intakes in the front of the car and directing it out of vents in the bonnet.

Since the raised air duct is located almost directly above where the current car’s pair of front electric motors are located, it may suggest the SF90 test car boasts a new motor setup that requires more cooling to keep the temperatures under control. 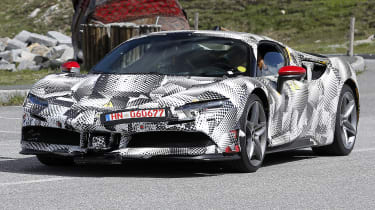 The change in aerodynamics at the front will probably mean the rear of this hotter SF90 will have to adapt. The active rear spoiler looks larger and more upright than before, which will also help generate more downforce.

Elsewhere, the test car retains the same design of the SF90 and underneath the bodywork we’re likely to see the same turbocharged 4.0-litre V8 petrol engine coupled to a battery and electric motor setup. We’ll have to wait and see if Ferrari has coaxed more out of it than the standard car’s 986bhp and 900Nm of torque.

That said, there’s also the chance this Ferrari SF90 isn’t a development mule for a faster variant at all. Instead, there’s a chance this could instead be a testbed for updated electronics tech to be used on the SF90 or other hybrid Ferraris. This could also be in tandem with other tech upgrades, such as an improved lithium-ion battery pack and a fleshing out of the Ferrari’s active safety assists.

Should this disguised development Ferrari SF90 be destined for production, at least a snippet of additional details could be revealed later in the year. Ferrari is set to host a Capital Markets Day meeting with investors on 16th June 2022, where it will disclose its long-term strategy and future product plans, which may also include a raft of updates for the SF90.