We’ll leave you to make a call on whether the mid-life tweaks to the C5 Aircross have improved the car’s looks. The dynamics remain better suited to urban motoring and a relaxed approach, though, with several key rivals offering a bit more involvement and slicker in-car tech.

The Citroen C5 Aircross has been a hugely significant model for the French manufacturer; more than a quarter of a million have been sold in Europe since it made its debut in 2018, but beyond the sales figures, it’s been crucial for a brand focused on comfort and family motoring to have an SUV of this size in its line-up. Now it’s our first chance to try the updated version of the car, which will arrive in UK dealers in a few weeks’ time.

On the outside at least, Citroen hasn’t mucked around too much with the formula. As is the norm with mid-life facelifts, the focus has been on tweaking plastics – headlights, bumper and grille – instead of significant changes to any of the car’s metal panels. Even so, there’s a sharp new look at the front, where the new grille and daytime running light treatment brings the C5 Aircross into greater alignment with the newly launched C5 X.

It’s inside where existing owners may notice the biggest difference; the dashboard has been changed, and the C5 Aircross gets a new 10-inch infotainment screen – again, borrowed from the C5 X – that’s mounted higher up to make it easier to see when on the move. This switch has in turn allowed Citroen to neaten up the centre console, slotting in a pair of vents and introducing a smaller gear selector that makes it all seem a little less cluttered.

There are two conventional powertrain options. The petrol edition uses Stellantis’s familiar 1.2-litre three-cylinder turbocharged PureTech motor, producing 128bhp. There’s still a diesel, too – a 1.6-litre BlueHDI with the same output as the petrol. The standard gearbox is a six-speed manual but both engines are available with Citroen’s EAT8 automatic; curiously, it comes with a premium of £2,075 on the petrol, but only £1,620 on the diesel.

The flagship is a plug-in hybrid model that combines a 1.6-litre four-cylinder petrol engine and an 80kW electric motor for a combined 222bhp and 360Nm of torque. The battery capacity is 13.2kWh, but significantly the maximum electric-only range is 38 miles – respectable rather than stellar, but enough for the car to fall into the 12 per cent company car tax band. This version is auto only, and you’ll have to look beyond the entry-level trim to get it. It may already be advisable to hold off for a month or two on this particular variant, since we’re told a version with more than 40 miles of range – and thus a better BiK rating – could well arrive before the end of this year.

The overall range now comprises three editions; it starts with Sense Plus (instead of the old model’s Sense), which brings 18-inch alloys, the aforementioned 10-inch infotainment system, a 12.3-inch digital instrument panel, front and rear parking sensors, and a rear-view camera.

Step up to Shine, the version we’re driving here, and you’ll get snazzier seats with Alcantara upholstery and adaptive cruise control, while the range-topping C-Series Edition has a two-tone colour scheme, a panoramic sunroof, wireless smartphone charging and a powered tailgate. 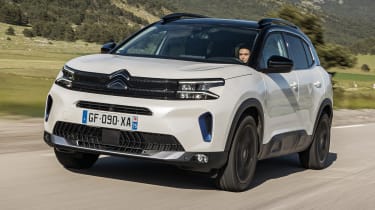 Underneath it all, the C5 Aircross’s mechanical bits haven’t changed at all – so it remains a competent offering, albeit one without any great hope of entertainment. The 1.2-litre PureTech motor has just about enough shove for most situations, although it would probably require patience with five people and their luggage on board. It’s gruff when revved but pretty refined at a cruise – and that’s frankly the car’s best situation anyway, since the automatic gearbox doesn’t appreciate being hustled. You’ll find its lumpy kickdowns and occasional half-wittedness rather tiring if you try to rush the C5 Aircross along a twisty road.

The chassis plays its part in this too. The steering is consistently weighted but desperately inert with it, while the suspension is fine at smoothing out gentle undulations and low-speed bumps around town, and wafting through flowing sequences of corners – but it’s a less willing participant when asked to change direction quickly. It’s safe and predictable, but ultimately unrewarding.

All versions of the car get Citroen’s Progressive Hydraulic Cushions – in effect, trick suspension bump stops – but high-frequency and sharp imperfections can still take the system beyond its limits. Once that happens, you’re left with standard EMP2-platform fare, with noticeable thunks coming through to the cabin, particularly at the rear (the non-hybrid models get a torsion beam at the back, incidentally; the plug-in features a multi-link set-up). In general, though, it’s more compliant around town than many rivals.

What you’re buying into, dynamically, is a car unashamedly focused more on comfort than any of its key competitors – and so also one that doesn’t try to offer anything approaching the still-modest level of fun that you can have in a Skoda Karoq, a Hyundai Tucson or the latest Kia Sportage.

The makeover inside delivers improved hardware – notably the higher-resolution screen – but keeps some of the old car’s foibles, including the software that runs on the display. It’s more closely linked to the system in the C4 than the better tech in the latest C5 X, so it keeps frustrating elements – like temperature displays, which require you to prod a button and access another screen to make adjustments. Again, the Korean competition remains noticeably slicker in this area.

The cabin can come in one of four treatments, each of which brings a different mix of plastics, leather-effect materials and leather upholstery. There’s extra squishiness in the seats – though lateral support remains vague at best – and the new finish inside is more polished and less cluttered, but no better than the class norm. The individual sliding seats in the rear, meanwhile, allow you to focus on rear-passenger space or boot capacity (it ranges from 580 to 720 litres in non-hybrid versions), but strangely, there’s not even a single pre-moulded plastic hook on which to hang a shopping bag.