Like its Hyundai Ioniq sister model, the Kia Niro offers three levels of electrification, and arguably it gets better with the more electric input there is. The standard hybrid can’t match the better-developed Toyota Prius for smoothness or efficiency, but the plug-in version has a decent all-electric range, while the e-Niro is an EV class leader for how far it can go on a single charge.

The other draw of the Niro is its SUV-style body. That means it’s pretty practical, if not all that pretty, while the hybrid/electric drive system doesn’t compromise interior space in any way, either. If only the Niro was a bit more special to drive.

2016 saw the Kia Niro first arrive in the UK, but the range has expanded and there are now hybrid, Niro PHEV and electric e-Niro models for sale. The hybrid version was the first to appear in 2016, with the plug-in PHEV arriving in 2017 and the full electric model debuting in 2019.

This template of three alternative fuel options in one body is one that’s used by the Hyundai Ioniq, which is the sister car to the Niro, albeit in a hatchback body, rather than an SUV one. Beyond that, the three versions of the Niro each have their own rivals. For the hybrid these include the Toyota Prius and a number of small diesel hatchbacks and crossovers, led by the likes of the Peugeot 3008 and Volkswagen Golf, the PHEV version has to go up against the Prius Plug-in and MINI Countryman S E, while the all-electric version shares running gear with the Hyundai Kona Electric, and takes on the Nissan Leaf, VW ID.3 and Renault Zoe.

One aspect of the Niro that is likely to appeal to buyers is its SUV style body. It’s more upright and conventional than cars like the Prius, and this alone could sway buyers into the Kia if they’re not fans of the Toyota’s futuristic shape. In an effort to distinguish the electric e-Niro from the hybrid versions, this model gets a smooth body-coloured nose incorporating a charging socket, replacing the grille seen on the hybrids, but is otherwise identical to its hybrid siblings.

Power for the electric motor comes from a lithium-ion polymer battery, which is rated at 1.56kWh in the standard hybrid and 8.9kWh in the plug-in version. While the hybrid version runs on electric power as and when it can, the plug-in has an estimated electric-only range of 30 miles. If you do lots of short trips and keep the battery topped up, then that means you could bring your petrol station visits down to a bare minimum. 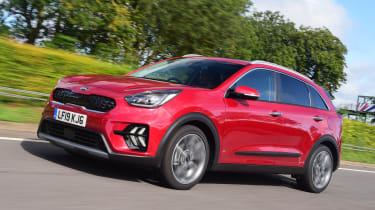 The e-Niro also uses li-ion polymer batteries, but they are far larger, at 39kWh for the short-range model and 64kWh for the longer range version, which are the same as the Kona Electric. As with the Kona, the bigger battery comes with a more powerful 201bhp electric motor, compared to 134bhp for the small battery. Claimed range for these two is 180 miles for the standard car and a generous 280 miles for the large capacity version.

The Niro range currently comprises 2, 3 and 4 trims, while the plug-in version does without the top-spec 4 specification. A ‘Connect’ version is also available, offering sat-nav, extra USB ports and Kia’s UVO connected services app over the 2 equipment level.

The e-Niro 39kWh version is only available in combination with the 2 trim level, while the more powerful 64kWh variant comes with 2, 3 and 4+ equipment lines.

If you’re looking to buy a Kia Niro, why not visit our sister site buyacar.co.uk for the latest deals…