The Emira is a massively important car for Lotus and, by and large, it makes a decent fist of being Britain’s alternative to the Porsche 718 Cayman. It goes well, sounds great, looks sensational and has an interior that’s miles better in design and quality than any of its predecessors. But there are some issues; the gearchange isn’t great and the chassis is quite soft in its responses. Overall, it’s strong effort, if not quite a class-leading one. Yet.

There’s a lot riding on the Lotus Emira. For starters, it’s the first all-new Lotus in more than a decade. Second, it represents the beginning of a brand-new era for the company, one that features more investment where it counts, which should (if everything goes according to plan) see the return of Lotus to the world’s sports car stage. And its ambition is to come back as a serious player, not just an intriguing but ultimately quaint alternative to the mainstream.

Fortunately, the Emira looks well and truly up to the job. In V6 First Edition guise, the Emira costs £75,995 and boasts 400bhp and 420Nm from a 3.5-litre supercharged V6 engine. That’s enough to fire it from 0-62mph in a rousing 4.3 seconds and give it a top speed of 180mph. In other words, it’s deep into Porsche 718 Cayman territory, both financially and dynamically.

The Emira weighs 1,458kg, so it’s not the lightest Lotus there has ever been – far from it. But of more importance is a cabin that’s well appointed with contemporary tech – featuring Apple CarPlay and Android Auto integration, a KEF stereo and a 10.25-inch touchscreen – all of which works a treat. The car also feels much better made than any previous Lotus inside and (thank the Lord) has a genuinely premium feel to it. From the materials on display to the quality of their assembly, the Emira will look like a class act to anyone lucky enough to get inside.

There are two different chassis specifications to choose from – Touring and Sport – and these bring different tyres and bespoke suspension settings. Our test car had the Sport chassis with Goodyear Eagle F1 tyres (Michelin Cup 2 tyres are the alternative) plus a couple of interior options that elevate the Emira’s price to just shy of £81,000. A touch more than a Porsche 718 Cayman GT4, in other words.

On the one hand, you could argue that this is a lot of money for a car with a Toyota V6 engine and a six-speed manual gearbox at its core. There’s a traditional torque-converter automatic available, too, but not a full dual-clutch as there is in its Cayman rival – although one will become available later in the year when the 2.0-litre version (featuring the same engine and gearbox as the Mercedes-AMG A 45 S hyper-hatch) goes on sale.

But on the other hand, visually you could easily mistake the Emira for a car that costs twice as much as it does, so there are arguments in both directions. 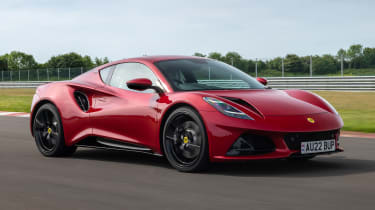 In profile, it has the distinct whiff of a British Ferrari to it, and in the flesh it really does look the real deal. It doesn’t disappoint once you get out on the road, either, even if it ultimately fails to deliver the same raw thrills as a Cayman.

There are certainly many good bits, including a fantastic soundtrack from the supercharged V6 engine, which has a properly stirring bark to it from 3,000rpm onwards. The engine also has a strong mid-range and delivers a decent thump in the back if you open it up, although it never quite manages to take your breath away with pure straight-line thrust in the same way that a six-cylinder Cayman does towards the top end of its rev range.

It’s a more cultured creation than that, and a lot more refined when you don’t want to drive it at 10 tenths and instead just want a civilised, comfortable sports car. This is a role that it performs very well indeed, in fact.

The ride is also calm and of a high quality, with a nice soothing undertone to its responses on most UK roads. It feels less grainy and manic than a Cayman and is generally quieter on the move as a result. All in all, this makes it a more comfortable sports car to drive for most of the time, but it’s also a less involving one when you’re going for it.

In truth, it’s a very different kind of car from the Cayman in both character and set-up. That’s because Lotus knew it would struggle to take on one of the best all-round sports cars at its own game, hence the reason it’s gone down a more refined route. And for much of the time, it works pretty well.

But there are some issues that separate it from greatness. The first is the steering, which is no more than okay in the feedback it provides. Lotus has perhaps gone a bit too far in making the Emira ‘civilised’ in this specific respect, the result being a curious absence of bite or accuracy from the front end when you’re pushing harder.

The second is the drivetrain, specifically the gearbox, which baulks occasionally between second and third, and is a country mile away from a Cayman’s transmission.

Other than this, the Emira is a strong effort – not a leftfield alternative to a Porsche, but a genuine contender that has values and a personality all of its own. We wish it luck because it deserves to succeed. The brand-new era for Lotus has begun and, mostly, it has started with a bang.