We’ve had official teaser images from BMW and spy shots of test cars, but this is our first look at the new second-generation M2 sports car without any camouflage. In a darkened studio we can see the new M2’s rear end, confirming several design details seen before on prototypes.

The rear lights look unchanged from the standard 2 Series, but there are some big differences in the bumper with two vertical indents for the rear reflectors (similar to the outgoing M2) and a large cut out at the bottom for a rear diffuser. BMW M’s trademark quad-exit exhaust tips will make a return on the M2 as well. It looks like the launch colour chosen for the M2 is Yas Marina Blue – a hue first seen on the F80 M3.

Last month, BMW revealed an official teaser image of a camouflaged M2 prototype wearing what looks to be some extras from the M Performance catalogue. Firstly, there’s a new rear wing, and secondly, a set of larger wheels which appear to be the forged ‘1000 M’ design currently available as part of BMW’s M Performance parts offering for the M3 and M4. The caption for the post read: “The fine details of driving excellence, waiting to be revealed,” followed by several hashtags including “#MPerformanceParts”.

We saw action shots of the new M2 earlier in 2022, in which the car was photographed from all angles at the famous Nurburgring circuit in Germany. As our spy pictures showed, a disguised version of the near production-ready high-performance flagship had been testing at the fearsome 12.9-mile long circuit.

Due to hit showrooms this year, just in time for BMW’s 50th anniversary of its M division, the new M2 will be based on the recently launched 2 Series Coupe. To reflect its focus on performance, the car gets an aggressive new look. 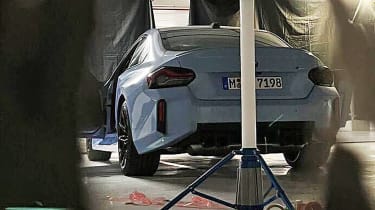