Audi S4 Avant will return on next-generation A4

These spy images are our first look at the new Audi S4 Avant – and it could be the last in the line of petrol-powered performance estates.

With Audi announcing last year it’ll launch its final petrol and diesel models in 2026, it’s likely this upcoming generation of Audi A4, and its sporty S4 and RS 4 variants, will be the last offered with an internal combustion powertrain.

We’ve spied the forthcoming A4 Avant estate model during cold-weather testing in Sweden, revealing cleaner, evolutionary styling over the current A4 and it looks like the hot S4 Avant will follow a similar design brief – giving a new range-topping RS 4 room for a more aggressive look.

At the front, the S4 Avant sports a narrower radiator grille, a sharper set of headlights and a neat lower grille arrangement. Some slim vertical intakes sit under the headlights, helping to funnel cooling air to the brakes. It also appears the S4 will lose the extra grille sitting just below the bonnet line of the outgoing car for a cleaner look.

Just like our previous spy shots of the regular A4 Avant, the surfacing along the side of the car is cleaner than before, doing without the razor-sharp creases of recent Audi models. This Avant estate features a steeply raked rear window and the integrated roof spoiler looks unchanged from the regular A4. The rudimentary tail lights of this pre-production car will be replaced by a set of LED units for the final car and it’s not clear whether we’ll see the full-width light bar used on other Audi models.

The spy shots of this S4 variant also give us our first view of the new A4’s interior. The latest version of Audi’s Virtual Cockpit will be used and we can see a larger unshrouded driver’s display behind the flat-bottomed steering wheel (a round wheel will probably feature in the less sporty models).

While much of the cabin remains hidden, we’re expecting a new dashboard with even fewer physical controls. It looks like the centre console has been redesigned with new toggle gear selectors, as the next A4 will probably only be available with an automatic gearbox.

New 2023 Audi A4 to stick with petrol and diesel power

The biggest changes will happen under the skin, though. The next A4 will stay on the same MLB underpinnings as the current model, but it’ll be powered by a line-up of new combustion engines which Audi’s head of technical development, Oliver Hoffman, describes as “the best [the company] has ever launched”.

Most of the line-up will be based around an updated version of the Volkswagen Group’s omnipresent EA888 turbocharged 2.0-litre four-cylinder petrol engine. Improvements will include new variable-section turbochargers that claim to improve throttle response and a higher-pressure fuel injection system.

Electrification will play a key role in the A4 range, too. The petrol engine will be offered with 48-volt mild-hybrid technology at the lower end of the line-up and full-blown plug-in hybrid technology towards the upper end of the range. The latter option will probably use the same 14.4kWh battery pack and electric motor as other MLB models, such as the Q5.

Diesel power will also remain, although it’ll probably play second fiddle to Audi’s new-look line-up of electrified petrol engines. The bulk of the diesel range should be based around the same 201bhp turbocharged 2.0-litre four-cylinder unit also found in the Q5 SUV.

The current S4 made the switch from petrol to diesel in 2019, using a 3.0-litre, turbocharged V6 producing 342bhp and offering 0-62mph time of 4.9 seconds. The new car will certainly produce more power but whether or not it’ll retain the diesel powertrain remains to be seen. 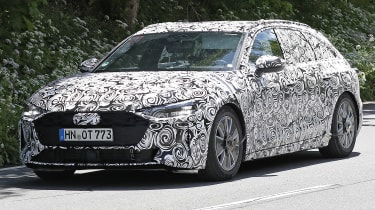 Audi could also launch a pure-electric version of the A4 Avant later in the car’s life cycle, which would give the brand somewhat of an edge over the competition. Currently none of the A4’s main rivals have been offered as a pure-electric estate. The focus in this class is currently on saloons, as shown by the BMW i4 and Tesla Model 3.

However, if it does materialise, the pure-electric A4 will probably move to a different platform, because the MLB underpinnings aren’t set up for EV powertrains. It’s likely it’ll use a modified version of the PPE chassis that will sit under the upcoming A6 e-tron.

The B5 designation issued for the first-generation A4 saw the car continue the lineage started by the Audi 80, making it the fifth generation of Audi compact executive

Handsome B6 was penned by designers Peter Schreyer and Luc Donckerwolke. It introduced V8 power in the range-topping S4, while the faster RS4 was yet to come.

There was a short life span for the B7, which was essentially a heavily facelifted B6. Perhaps this is the A4 best remembered by enthusiasts thanks to the storming 414bhp RS4.

Audi moved to the MLB platform for the B8-generation A4. A significant increase in wheelbase was joined by the introduction of the first A4 Allroad off-road estate.

Current B9 introduced significant connectivity and infotainment advances over the B8. Estate-only RS 4 Avant goes without a V8 but turbo six-cylinder has a healthy 444bhp.

What will the new Audi A4 have to beat? These are the best executive cars on sale right now…