The Fiat Doblo has been given a refresh for 2022 and with it has come the new all-electric E-Doblo.

The E-Doblo is the third all-electric van in the Fiat Professional range, following the E-Ducato and E-Scudo. The EMP2 platform from parent company Stellanits underpins the new E-Doblo and we’ve already seen it in use as the basis for the Peugeot e-Partner and Citroen e-Berlingo. We can expect the E-Doblo to be a very similar van to its two French siblings, not to mention the Vauxhall Combo and Toyota Proace City which also use the technology.

Equipped with a 100kW electric motor and a 50kWh battery, the E-Doblo actually fares a little better than the Peugeot or Citroen when it comes to range, pipping them by 2 miles with a 173-mile maximum. It also features three driving modes – ‘Normal’ for regular driving, ‘Eco’ to maximum fuel efficiency and ‘Power’ to improve peak power.

Fiat says the E-Doblo is available with a “Rapid Charge Mode” which results in 80% of the battery being able to charge in 30 minutes when mated to a 100kW charger – identical figures to the Peugeot e-Partner. Fiat’s ‘Magic Plug’ also features in the E-Doblo – making it possible to use the battery’s electric energy for power tools or appliances.

The payload is unchanged over the Peugeot and Citroen, with up to 800kg available in the E-Doblo and 1,000kg for the internal-combustion engined Doblo. Both the E-Doblo and Doblo are offered in the same configurations – Van and 5-seater Crew Cab – and in long-wheelbase and short-wheelbase versions. These bodystyles allow for a maximum load volume of 4.4m3 in the long wheelbase variants. 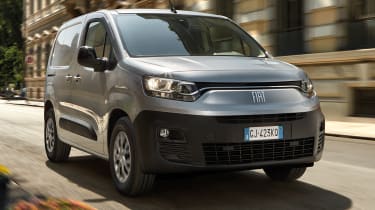 In the Doblo, customers can choose between two diesel powertrains and petrol. The diesels are both 1.5-litre four-cylinder units, one has 99bhp and the other 128bhp. Both are available with a manual gearbox or an eight-speed auto transmission. The 1.2-litre petrol unit offers 109bhp.

The Doblo has been given some new safety features too. There’s automatic traffic signal recognition, active safety brake, lane keep assist and driver attention alert. The tech doesn’t stop there with Fiat adding a head-up display, as well as a rear parking camera and sensors.

The van version of the new Doblo is equipped with Fiat’s ‘Grip Control System’, which is designed to aid traction on slippery surfaces. There’s also hill descent control for gradients of over 3%.

Manufacturing of both the Doblo and E-Doblo will take place at Stellantis’ Vigo plant in Spain – also home to the Peugeot Partner, Citroen Berlingo, Vauxhall Combo, Toyota ProAce City, along with their respective pure-electric variants.