Skoda Scala to get mid-life refresh in 2023

An update is coming for the Skoda Scala next year and we’ve caught it testing in prototype form ahead of its unveiling.

The Scala hasn’t exactly stormed the family hatchback sector since its introduction in 2019, but the Czech firm is hoping a mid-life facelift will help it catch up with its Octavia, Kamiq and Karoq siblings.

From what we can tell in these latest spy shots, the exterior changes will include a redesigned front end, with new LED headlights, bumper and grille. There’s also a new intake design which could help improve the Scala’s drag coefficient.

We’re expecting the side to be unchanged from the current car, but around the rear we see plenty of camouflage – which suggests the Scala could receive a new rear bumper, tail-lights and roof spoiler.

The inside will likely remain similar to the pre-facelift model. The current car’s 8.0-inch and 9.2-inch infotainment systems should be carried forward to the new model, although the entry-level car’s 6.5-inch screen could be dropped from the line-up. 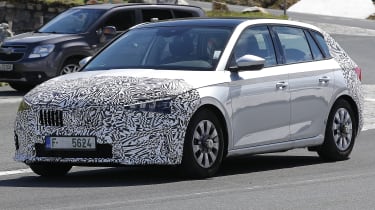 Peering through the windows of this prototype, we can see a slightly reshaped dashboard – but the instruments and steering wheel look identical to the current car. It’s likely Skoda will also update the upholstery to keep the cabin looking fresh.

The engine line-up won’t change over the current model. The Scala is offered with a range of 1.0-litre and 1.5-litre petrol engines, all of which now also power the all-new Fabia supermini, so it seems likely that Skoda won’t kill off any of those. But don’t expect hybrid power to join the Scala range – like the Fabia it sits on the brand’s MQB A0 platform.

Volkswagen is still launching plenty of new cars and vans with diesel power so expect that to remain an option on the Scala range. Expect to see the same 114bhp 1.6-litre four-cylinder engine as the current car, and should be offered with either a manual or an automatic gearbox.

Now read our review of the Scala’s smaller sibling, the all-new Fabia