Apple CarPlay is getting a major upgrade that’s set for a 2023 release and the tech giant has teased a few details of what we can expect the new system to look like.

From the Toyota Aygo X city car to the Rolls-Royce Cullinan, pretty much every manufacturer offers Apple’s infotainment system in its cars these days and regular updates have kept the software competitive against the systems built into vehicles as well as CarPlay’s arch rival, Android Auto.

Apple says “the next generation of CarPlay brings a fully integrated, immersive iPhone experience to your vehicle”. From the teaser image the California-based company has sent us we can expect a layout on the car’s infotainment screen that’s more inline with that of an iPhone.The content for the driver’s screens will contain traditional information like the speedometer, rev gauge, temperature gauge and fuel reserve. The central screens will have a selection of apps just like the menu format of the iPhone. Functions like the car’s radio and temperature controls will be accessed on the system, meaning we could see car makers ditch the physical controls for those features altogether. 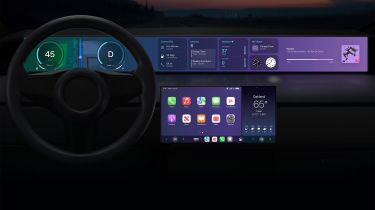 Just last year the Apple CarPlay software had an update to include control over air-conditioning and seat adjustment and we’re likely to see even more new features on this latest upgrade.

You should still get the option to personalise the layout however, ensuring the information most important to the occupants is clearly visible. While this teaser image shows a rather large selection of infotainment screens, it remains to be seen how the new system will look on smaller screens.

We expect the rollout of the new Apple CarPlay system to begin in 2023.