The Polestar 3 will debut in October this year, with customers being able to order the all-electric SUV from the day of its premiere. It’ll provide fresh competition in the rapidly growing large electric premium SUV segment, rivalling the likes of the Audi e-tron Sportback and BMW iX.

Thomas Ingenlath, Polestar CEO, also revealed the brand will be forming a global partnership with the car rental company Hertz to supply 65,000 cars over the next five years – despite Polestar conceding the amount of vehicles being delivered this year is down to 50,000 from 65,000. Ingenlath also said, “Any short- to medium-term economic effects have not dented our goal of selling 290,000 cars in 2025 – 10 times more than we sold in 2021”. The Polestar 3 is expected to form a large chunk of those sales.

The Polestar 3 will also share its production facility with the next XC90 at Volvo’s South Carolina plant and should start in early 2023. “Polestar 3 will be built in America, for our American customers,” said Polestar CEO Thomas Ingenlath. It’ll be the most important market for the model, but it will be globally released and also built in China for export into the European market.

The Polestar 3 will remain true to our previous teaser images with a crisp, swooping shape. The latest images highlight design cues taken from the firm’s Precept luxury saloon concept, translated onto the taller SUV body of the 3. This is most obvious in the front end design, which uses a similar T-shaped headlight profile, thin blanked-off grille and sloping bonnet. The 3 also appears to have flush-fitting door handles to help lower its drag coefficient.

“Polestar 3 is the SUV for the electric age. Our design identity evolves with this high-end large luxury EV, with a strong, individual brand character,” says Thomas Ingenlath, Polestar CEO. “With this car, we bring the ‘sport’ back to the SUV, staying true to our performance roots.”

In 2020, Polestar’s Design Director Max Missoni explained how the Precept would be a strong indication of what’s to come for the brand, with the 3 SUV the first in a number of models to be inspired by it.

“The next car that Polestar will launch is the Polestar 3,” said Missoni. “It will be a high-performance SUV that is a different car in its bodystyle, but I would say the Precept serves as a precursor to the design language that you will see in that car.” 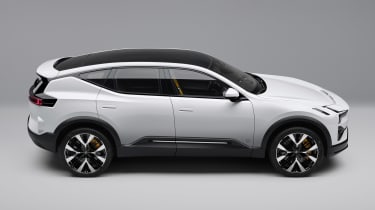 Missoni also confirmed that the Precept’s interior and infotainment system preview what comes next inside Polestar models. “This is quite a realistic statement of our future,” he stressed.

Missoni explained how Polestar has gradually separated from Volvo from a styling perspective. According to the design chief, while the Polestar 1 was based heavily on the Volvo Concept Coupé from 2013, the Polestar 2 represented a parting of the ways.

The Polestar 3’s design is intended to create a larger degree of visual separation between Polestar and sister brand, Volvo. It will share its SPA2 platform with the next-generation Volvo XC90 and arrive around the same time as its SUV cousin.

However, while Volvo’s electric SUV will major on ride comfort, the Polestar version will have sportier chassis settings. Missoni claims that it will be a performance SUV and the Polestar 3’s more powerful dual-electric motor set-up reflects this. Polestar claims the 3 will offer an all-electric range of 373 miles.

The new SPA2 platform is an evolution of SPA1 and it has been designed to cater for cars including the next S60 and V60, as well as the larger S90 and V90 models. Smaller Volvos and Polestars, such as the 2, use the CMA architecture, underpinning the XC40 Recharge and the new C40.

While most of the technical limitations of the smaller CMA platform are already known, SPA2 is a totally new step. On the Polestar 3 and next XC90, Volvo will introduce a range of fully electric powertrains, as well as integration with a new Google developed infotainment system called Android Automotive. The tech giant’s extensive mapping data will be built into the cars alongside new advanced driver-assistance features, which will include the latest semi-autonomous driving capabilities.

Are you excited by Polestar’s re-invention as a standalone brand? Can it tame Tesla? Let us know below…