Volkswagen’s Polo GTI has a great range of talents and makes a good case for itself as one of the more sensible offerings within the current range of supermini hot hatchbacks. It isn’t quite as feisty as you might expect, however, and those looking for the ultimate thrills in this class would perhaps be best advised to have a closer look at Hyundai’s excellent i20 N or Ford’s Fiesta ST.

All three offer around 200bhp, although the Polo can’t match the entertainment on offer from these two challengers when tackling a favourite back road. While the Polo GTI remains a solid all-rounder, it won’t put a smile on your face.

The Volkswagen Polo GTI takes a rather more mature take on the hot supermini than the majority of its rivals that are keener to provide driving thrills. The GTI is perhaps a little too refined and sensible for its own good, when the entire reason for buying this model over a cheaper Polo model is to provide an entertaining driving experience. As an all-rounder it’s an excellent prospect, just not an exciting one.

There’s still plenty of positives to take away though; the GTI uses the tried and tested 2.0-litre VW Group turbocharged petrol engine, producing 204bhp and now mated to a seven-speed DSG dual-clutch transmission. Cabin space is decent and its pretty refined for a hot supermini, too. As long as buyers approach a potential purchase with their eyes open, the GTI shouldn’t disappoint.

Given this is meant to be a drivers’ car, it’s likely that many buyers would be keen to have the additional interaction and control associated with a manual gearbox. But Volkswagen in its infinite wisdom has decided on solely offering an automatic DSG ‘box for the GTI. Rivals such as the Hyundai i20 N and Ford Fiesta ST offer manual options, although the MINI Cooper S hatchback uses a Steptronic auto transmission.

Following the launch of the GTI in 2018, Volkswagen followed up with a facelifted model in 2021. As with the wider Polo range, its styling revisions echo that of its bigger Golf sibling, along with the introduction of enhanced onboard tech and improved driver assistance systems.

The standard Volkswagen Polo is an eminently sensible premium supermini and the GTI version builds on this by adding more power and some additional poise thanks to a lower and more sporting suspension setup. While this does add some sparkle to the Polo it’s never what you would call genuinely exciting and if you want the ultimate in a thrilling supermini you’d be best off looking at the Ford Fiesta ST.

The new Volkswagen Polo is a larger car than before – it’s as large as a Mk4 Volkswagen Golf in some respects – and also has a wider track than the old model which provides it with a stable platform. Its suspension sits 15mm lower than on the rest of the Polo range and with revised suspension settings and dampers that can be switched between Normal and Sport settings, it has the right ingredients to provide an exciting drive.

However, the Polo GTI has been set up to offer safe and reassuring handling and as a result it doesn’t supply driving thrills in the same way as the Fiesta ST. It can also sometimes struggle to use all of its power with the front wheels scrabbling for grip and instead of fitting a mechanical limited-slip differential Volkswagen has opted for an electronic system called XDS which is not as effective.

The steering set up doesn’t offer as much feedback as the ones in some of the Polo GTI’s rivals, which makes it difficult to know when grip is about to run out. The Polo GTI comes as standard fitted with 17-inch alloy wheels and in this configuration the Polo’s ride is perfectly refined. We’d advise against the optional 18-inch wheels though as this does make the ride a little firm at times, especially over rougher roads with the suspension set to its Sport setting. In Normal mode on the motorway it is refined though, absorbing bumps and lumps very well.

There’s just the one engine to choose from in the Polo GTI, a 2.0-litre turbocharged four-cylinder petrol that can also be found in the Golf GTI, but Volkswagen has tuned it for less power in the Polo. Having said that, with 204bhp it does feel quick. The car completes the 0-62mph sprint in 6.5 seconds and has a top speed of 149mph which gives it virtually the same figures as the Fiesta ST. However, the Polo GTI’s engine does feel a little flat when compared to the muscular MINI Cooper S and the revvy Fiesta.

The Polo GTI’s official fuel economy figure under the WLTP test procedure is 41.5 mpg, which is pretty impressive given the performance on offer. The facelifted model’s seven-speed DSG automatic gearbox now includes a coasting function that helps to improve overall efficiency.

It’s just eclipsed by the Fiesta ST’s 42.2mpg, but it’s not a true comparison as the Fiesta is only available as a manual whereas the Polo GTI can only be had with the DSG gearbox. The Hyundai i20 N isn’t quite as efficient, managing an official figure of 40.4mpg.

All in all, the Polo GTI offers remarkable fuel economy given its sub-seven-second 0-62mph time, while CO2 emissions of 155g/km are comparable with both rivals above. In terms of Benefit-in-Kind (BiK) company car taxation, the Polo sits in the 35 per cent tax bracket, so it probably won’t be the first choice for fleet managers.

Although the Polo GTI is the performance model in the range, it actually occupies insurance group 23, which means it should be cheaper to cover than the Fiesta ST in group 26, and the Hyundai i20 N in group 27.

Residual values for the Polo GTI have strengthened to the point where our data suggests that you should see around 57 per cent of its original list price retained, after a typical three-year/36,000-mile ownership period. This is similar to the Fiesta ST range, although the Hyundai i20 N is slightly ahead on 59 per cent. 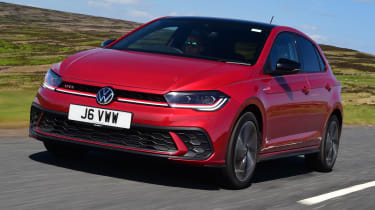 In keeping with the Polo GTI’s all-round ability it’s safe to say that the car’s styling is relatively subdued for a hot supermini. It’s a handsome car but the overall effect is subtle despite the GTI featuring reshaped front and rear bumpers, side sill extensions as well as a gloss black rear spoiler and twin chrome exhaust tailpipes. As is the case with all Volkswagen’s GTI models, the Polo also features the traditional red strip running along the car’s front grille.

The standard Polo’s interior has a quality feel to it with excellent materials and a robust build quality and for the GTI there are a number of enhancements in keeping with the sporty theme. The most obvious change are the sports seats covered in a black and red tartan cloth which are height and lumbar adjustable to achieve the perfect driving position. They’re comfy and hold you in place during cornering.

The Polo doesn’t have VW’s latest infotainment set-up, but that’s a blessing, because it means it still includes a couple of physical controls, as well as permanent touch-sensitive shortcut keys surrounding the display. The responsive screen and keen loading times mean route planning is quick, too.

Driver-assist systems such as lane assist are easy to disable; simply press a button on the end of the left- hand column stalk and a menu appears in the digital driver’s display allowing you to deactivate it.

The GTI gets an uprated stereo, courtesy of Beats Audio. Or at least that’s what the logos say – it barely sounds any different from the average set-up you get in a standard Polo.

As with most cars these days, the Polo GTI has grown significantly compared to its predecessor which makes it a very practical proposition and could be used as a family car if you don’t need a huge amount of interior accommodation. With its five-door-only configuration it’s a good proposition from a practicality standpoint – though the Fiesta ST and MINI Cooper S can both be ordered in this bodystyle too.

As well as offering better passenger accommodation than the previous generation Polo, the latest Polo GTI has plenty of storage space for oddments and a decently-sized glovebox.

At 4067mm long, 1751mm wide and 1438mm in height the Polo GTI is bigger than even the five-door MINI Cooper S and is only 40mm narrower than the current Volkswagen Golf.

Thanks to its increase in size the Polo feels roomier inside than before, especially in the rear where head room has increased by 21mm while there’s more shoulder and leg room, too. Unsurprisingly three adults will struggle to be entirely comfortable for longer journeys but there should be plenty of space for three smaller children.

The Polo GTI models don’t have quite such a large boot as the non-GTI models, losing 46-litres of space over the regular Polo, but it still comprehensively trounces the MINI three-door’s 211 litres and even the five-door’s 278-litres. The Polo GTI’s boot is also marginally larger than the Fiesta ST’s which can accommodate 292 litres.

For many years Volkswagen traded on the tagline; ‘If only everything in life was as reliable as a Volkswagen’ and its reputation for building solid and reliable cars remains to this day. The Polo finished in 48th place out of 75 cars in our Driver Power best cars to own survey, although the T-Roc model finished in 24th spot and three VW Group brands featured models inside the top ten.

As well as being a reliable prospect, the Polo GTI should be safe too. It scored the maximum five-star rating when it was tested by Euro NCAP, with adult occupant protection rated at 96 per cent and child safety at 85 per cent. Standard fit safety systems such as Volkswagen’s Front Assist enables automatic emergency braking as well as incorporating a pedestrian detection system.

Volkswagen offers a three-year/60,000-mile warranty on the Polo GTI which is starting to look somewhat less than impressive these days. Manufacturers such as Hyundai and Kia stretch their warranties to five and seven years respectively.

However, once your three-year VW warranty is up you can purchase an extension with different prices for different levels of cover.

Volkswagen offers a range of fixed and flexible payment servicing packages for the Polo, differentiated by the age of your car. There are plans for cars under one year old, over one year old and models aged between three and six years.

For an alternative review of the latest Volkswagen Polo GTI, visit our sister site carbuyer.co.uk…