It’s not the first time Citroen and Australian surfing brand Rip Curl have collaborated on a car, following on from the C4 Cactus Rip Curl in 2016 and the Berlingo Rip Curl in 2020.

Sadly for the surfing enthusiasts out there, just like the other Rip Curl Citroens, the C3 Aircross Rip Curl doesn’t come with its own surfboard, but it does get plenty of other goodies to help it stand out from the rest of the range.

From the outside, we can see the C3 Aircross has been given 17-inch ‘Origami’ alloy wheels finished in black and wrapped in all-season tyres. It also adds an ‘Anodised Blue’ colour pack, resulting in blue front skid plates and door mirrors. Rip Curl decals have been dotted around the exterior, too. 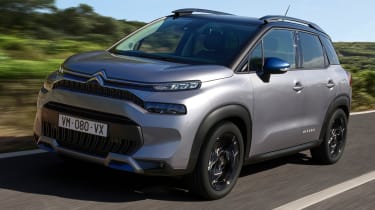 The interior also gets the same colour theme with Citroen’s ‘Advanced Comfort seats’ dashboards, air vents and the centre console all finished in blue. There’s also a panoramic sunroof with an electric sunblind, colour head-up display and upgraded sound system.

The C3 Aircross Rip Curl can be specified with Citroen’s ‘Advanced Grip Control’ system with hill descent assist – which could come in handy when you’re trying to find the best surfing beaches.

A choice of three engines are available; a 1.2-litre three-cylinder petrol Puretech with either 108bhp or 128bhp coupled to a six-speed manual transmission and a 108bhp 1.5-litre four-cylinder BlueHDi diesel mated to a six-speed automatic.

Sitting above the previous range-topping Shine Plus trim level, the Puretech 110 C3 Aircross Rip Curl starts from £23,815, next up is the diesel from £24,985 and the more powerful petrol model costs from £25,395. It’s available to order now, but you’ll have to move quickly if you want your Rip Curl to see the beach this summer.