Called The New Day, the concept has been unveiled by the brand’s Chinese business unit, and is a large four-door, four-seat coupe. As hinted at by the brand, it is a preview of what comes next for Lynk & Co design wise, but it isn’t a car lacking in stunning concept car design touches.

Information about the car remains limited, with only a handful of images and quotes distributed on Lynk & Co’s Chinese social media channels, and Chinese car media reports to rely on. But the concept of sunrise over a skyscraper-laden city is described as the inspiration behind the updated look.

Looking down the sides of the car, bold new character lines form in the door sills and beltline, while the design takes a dramatic change from the C-pillar onwards. Not only does it gradually change colour, to a dusk-like dark blue hue, the windowline tapers up sharply and a large, shooting-brake like rear end forms. Lynk & Co says that this dramatic change in the car’s lines represents the ‘first rays of sunlight’ breaking through the night sky. 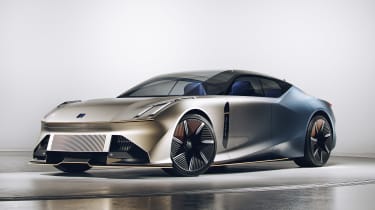 At the rear, The Next Day includes a ‘shapeshifting’ rear lighting signature. Spanning the width of the car’s back end, the taillight bar and its vertical elements form part of a movable rear wing – when the wing is up, the vertical LED strips move up with it, revealing an illuminated Lynk & Co badge in the process.

Sitting above the cabin is a glass canopy, while the doors open in a novel way combining rear-hinged ‘suicide’ style back doors with the upwards opening butterfly-style doors at the front.

Inside, the interior features a similar ‘sunrise’ element in the hand-woven carpet, which transitions from bright orange in the front to dark blue in the rear. The four seats are upholstered in blue velvet. Sitting in front of the driver is a yoke-like steering control, connected to a wooden dashboard layered with denim. A huge touchscreen display sits on the other side of the centre console and the windscreen is used as a large augmented reality head-up display (HUD).

Shots of the interior of The New Day concept’s HUD hint at an electric-only range of at least (200km) 124 miles for the E-Motive technology, but this is likely to be slightly smaller for the production-ready version of the hybrid system, believed to be based on the brand’s 1.5-litre three-cylinder turbo petrol engine.