Porsche has unveiled a track-only EV race car to showcase its bleeding edge electric drivetrain technology. Called the 718 Cayman GT4 ePerformance, the project previews the brand’s future in all-electric motorsport, and will serve as a test bed for the current Cayman’s EV-only replacement.

The Cayman GT4 ePerformance is built using the same chassis as the flat-six powered Cayman GT4 Clubsport racer. It’s a development of the Porsche Mission R concept that Auto Express drove in the USA last year, and features that car’s dual-motor powertrain technology to produce a total maximum of 1,073bhp.

However, during a race power is pegged back to 604bhp to maintain enough battery charge for a 30-minute stint; the GT4 ePerformance trades blows with the 503bhp 911 GT3 Cup car in terms of top speed and lap times, says Porsche.

The car’s electric motors are permanently excited synchronous units, and a specially designed oil cooling system keeps motor and battery temperatures in check while on track. This limits performance capping due to excessive temperatures, which can occur with some high-performance EVs, and allows the driver to access the full 604bhp in race mode for half an hour.

The GT4 ePerformance utilises a 900-volt electronic architecture, which enables a five-to-80 per cent charge time of just 15 minutes. It also receives a bespoke aero package that draws from the 911 GT3 Cup; the EV is 140mm wider than the GT4 Clubsport, with new 18-inch wheels and a towering swan-neck rear wing. The muscular body panels are made from natural fibre composites. 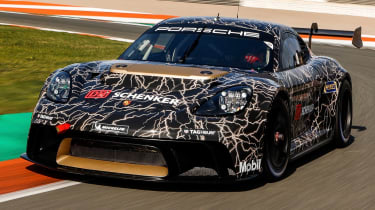 Porsche recently announced that the next generation of its Cayman and Boxster models would go all-electric, and although the forthcoming compact coupe and roadster models won’t arrive with the aggressive aero and mammoth peak power of the racer, the GT4 ePerformance project will help develop Porsche’s next-generation sports cars.

For the time being, however, the firm is eyeing up an all-electric one-make race series with the GT4 ePerformance. Matthias Scholz, Porsche’s GT racing project manager, said:

“With the Mission R, we’ve shown how Porsche envisages sustainable customer motor racing in the future. The 718 Cayman GT4 ePerformance now demonstrates that this vision works impressively on the racetrack. We’re very excited about the response because a one-make cup with electric racing cars would be an important addition to our existing customer racing programme.”

The Cayman GT4 ePerformance will make its public debut at this year’s Goodwood Festival of Speed.