The 500X doesn’t quite live up to the fun-to-drive characteristics of the 500 city car and it’s far from the most comfortable in its class. However, plenty will be sold on looks alone and the option of the fabric roofed ‘Dolcevita’ model really adds some flair to the range.

The Fiat 500 was one of the top ten best-selling cars in Europe last year, and with good reason. The retro city car has oodles of charm, is fun to drive and is now offered with an all-important pure-electric variant.

In theory then, the larger 500X should be even more popular because it has the added appeal of SUV practicality and it’s still pretty fashionable inside and out. And while there’s no all-electric model, there is an option of a mild-hybrid.

Its appeal should be further boosted by this special edition (RED) version, a trim level made in partnership with international AIDS charity (RED). It costs an additional £1,000 over the standard Dolcevita, but adds the normally optional Comfort Pack, a red dashboard, red electrically adjustable door mirrors and red piping on the seat.

Under the bonnet, our car uses Fiat’s latest ‘Firefly’ mild-hybrid 1.5-litre turbocharged four-cylinder that’s mated to a 48-volt belt-driven starter generator and a compact 15kW battery pack. Unfortunately, it’s not the most frugal mild-hybrid small SUV on sale – fuel consumption of 46.8mpg is only 3.5mpg higher than the 120bhp 1.0-litre non-hybrid model, while a mild-hybrid Ford Puma fitted with a seven-speed automatic transmission will claim 49.6mpg in comparison.

Either way, the combined powertrain now develops 128bhp and 240Nm of torque, meaning the 0-62mph sprint takes 9.4 seconds, a second quicker than the old model and just fast enough to pip the hybrid Puma.

Don’t think the 500X has the Puma or most of its other rivals beat for driving fun, though. It’s not the most responsive when you’re in need of some acceleration as the dual-clutch transmission is annoyingly slow to kick down a gear.

In the corners there’s surprisingly little body roll, although the steering doesn’t inspire too much confidence. It’s quick enough to respond, but it’s fairly numb and the 500X soon understeers if you carry speed into a bend.

The Fiat 500X is far happier when you’re travelling at lower speeds in town and city centres, where light steering and a raised driving position combine for effortless driving. There’s a bit of a rattle to the petrol engine at lower speeds, but if you’re going slow enough the 500X will run solely on electric power.

Ride comfort isn’t quite on the same level as rivals from the VW Group, such as the SEAT Arona and Skoda Kamiq, but the 500X’s suspension does well in coping with severe potholes and bumps in the road around town. The chassis, which is shared with a Jeep Renegade, can feel a little firm at higher speeds, however.

The interior of the 500X is a positive and much of it will be familiar to Fiat 500 drivers. Step inside and you’re met with glossy plastic on the dash (you can choose different colours) and 500 badging. There’s virtually no hard edges and it manages to still feel retro and fun, unlike the dark and gloomy interiors of its SUV rivals. It also feels pretty hard-wearing and well screwed together.

Granted, the tech on offer isn’t cutting edge. The 7.0-inch touchscreen infotainment system includes a built-in sat nav, DAB radio, Bluetooth and Apple CarPlay and Android Auto compatibility as standard, but the rear view camera screen has the clarity of an old Nintento Gameboy handheld games console. Still, the steering wheel mounted buttons are intuitive and the air-conditioning is both figuratively and literally a breath of fresh air thanks to the use of physical controls instead of the fiddly touchscreen systems of some rivals.

We’d like a few more storage areas in the cabin, but there’s plenty of room both for front and rear passengers. Choose the Dolcevita model and headroom in the rear is severely diminished by the surround for the full length fabric sunroof. Practicality is enhanced, however, by the ‘Comfort Pack’, which adds an adjustable front armrest, powered lumbar support and a rear USB port.

The boot capacity is just 350 litres, which is 72 litres less than you’d get in a Nissan Juke or Renault Captur, and a whopping 106 litres less than the Puma. The rear seats do fold down easily, however, to allow for a much more acceptable 1,000-litre load space.

Mild-hybrid small SUVs are still relatively thin on the ground, but the Puma remains a tough competitor and the upcoming Nissan Juke Hybrid should also have plenty in its armoury to become a force in the segment. That leaves the hybrid Fiat 500X already feeling a little dated, even with this new powertrain, and it’s not exactly cheap either with prices starting from £27,595. 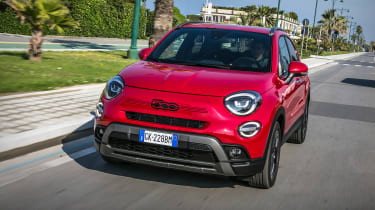 Read our list of the best small SUVs and crossovers here…