The Performance RWD’s uplift in power is very welcome indeed, helping enhance the additional excitement and engagement brought by its two-wheel drive layout. It’s a shame the V10 isn’t as vocal as it once was, but otherwise there’s not much to grumble about here.

The Audi R8 and its fabulous naturally-aspirated V10 are on borrowed time. Both have persevered amidst rumours of downsizing a few years ago, but the end is nigh for the supercar that transformed Audi’s image forever.

Within a year or so it’ll be no more, and almost certainly replaced with something all-electric. But don’t feel too sad, as Audi won’t let the machine that rewrote the rules on supercar useability go out without a bang.

Recent spy shots suggest Audi is working on a hardcore, bewinged run-out special that looks a lot like a successor to the first-gen R8 GT. The car you see here isn’t it – it’s the R8 Performance RWD, and we’re thinking of it as more of a support act for the R8’s swansong. And one certainly worth turning up to the show early for.

Rear-drive R8 road cars have been around for a while now, starting with the limited-run RWS, before the R8 RWD became a permanent fixture in the range after a mid-life refresh. The R8 Performance RWD serves as a replacement for both the latter car and the now-discontinued entry-level R8 quattro.

The headline here is a 29bhp power increase, bringing the 5.2-litre V10’s output to 562bhp – in line with the old quattro, but still some way off the 614bhp offered up by the R8 Performance and the 602bhp delivered by the related, and more outlandish, Lamborghini Huracan Evo RWD. Power makes its way to the rear via the slick-as-ever seven-speed ‘S Tronic’ dual-clutch automatic gearbox and a mechanical limited-slip differential.

Also new is the option of dynamic steering, something previously reserved for four-wheel drive R8s, although this isn’t available in the UK. As before, there’s no exterior badging to distinguish this car – you have to look for some less overt visual clues, including the use of gloss black trim instead of matte titanium, 19-inch wheels in place of 20s, and body-coloured lower sideblades.

Some of that goes out the window when speccing the Edition trim, as found on our test car, which bumps the wheel size back up to 20-inches and provides the same carbon fibre side blade finish as seen on the quattro Edition. However, supercar spotters out there can at least rely on peering through the window to spy the ‘RWD’ plaque on the dashboard.

To drive, the R8 RWD differentiates itself from the quattro much more obviously. The extra power this time around means the traction limitations are more conspicuous, even in the dry – put your foot down from a standstill or a low speed and work through a through gears, and the ESP light will flicker wildly as the 305mm-wide rear tyres struggle to deal with the demands of the howling V10, which still sounds great spinning up to 8000rpm, if noticeably more muted than earlier R8s thanks to the fitment of particulate filters.

The R8 RWD feels just a little too powerful for its own good, and that’s half the appeal. The other half comes in how it behaves in the corners – ditching drive to the front wheels makes for a pointier, more lively-feeling car, even with the electronic aids fully engaged.

The recalibrated ESP is very successful on the whole – its interventions are usually quite subtle. If preferred, there’s a ‘halfway house’ ESP Sport setup that dials the assistance back, making for a more demanding and engaging drive with a decent amount of movement at the rear. Audi says this mode allows drivers to perform a “controlled drift”, something we’ll be sure to test the next time we have one of these on a circuit. 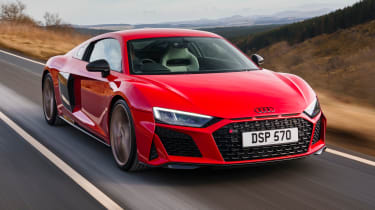 The omission of dynamic steering in the UK is just fine by us. While the controversial system – which varies the steering ratio depending on speed and drive mode – has become better over the years, it can still feel unpredictable and unatural. The standard rack in the Performance RWD on the other hand makes for the best-steering second-generation R8 road car.

The ditching of the front driveshafts (which contributes to a 65kg overall weight saving, by the way) sweetens the steering, which delivers a reasonable degree of feedback while offering just the right amount of resistance when you turn the wheel. The speed is spot on, too.

A McLaren will give more steering feel, thanks in large part to that company’s insistence on using hydraulic power assistance over electric, plus more front-end bite – understeer does rear its ugly head in the R8 RWD, particularly in tighter bends.

That said, it’s a satisfying, involving car to drive, helped by the damping. You can’t option an adaptive setup on the RWD, but it’s not something we missed, this car’s passive setup deftly balancing comfort and composure. On rougher roads the ride can get a little chattery, but not unacceptably so.

The R8 is composed enough that you wouldn’t think twice before taking it on a longer journey. It also helps that the cabin in this now six-year-old still looks great, with a striking design and excellent quality. Great all-round visibility for a mid-engined car also makes the R8 especially easy to use on ‘normal’ journeys.

You’ll just need to bear in mind a longer jaunt won’t especially be cheap, particularly if you get carried away with the throttle – we averaged a little over 18mpg over a few days with the car. Carrying capacity is also fairly modest, although you do get some space behind the seats of the coupe version, and the 112-litre front luggage compartment is more useful than you might expect.

Much of the last few paragraphs can be attributed to the R8 quattro, of course, which also has the benefit of a four-wheel drive system, making it even quicker in wet conditions, and so upping its useability further. Doing without this for the sake of an extra layer of engagement seems like a more than acceptable trade – whether you want to make it depends on what you’re after as a driver.