Upon first inspection, the DS 7 Crossback can’t quite match its German rivals for cabin finish, even though the kit list is impressive. Now it’s time to see if our view improves as the miles add up.

The launch of the DS brand in 2014 as a separate entity was part-white flag, part-clean-slate bid by the French to build some of the brand equity that underpins the German marques. Premium-car buyers are making the same kind of calculations today as they were a decade ago, and we’re now living with a DS 7 Crossback to see if France can finally deliver the right answers.

The problem for DS is that Audi sold just under 118,000 vehicles in the UK in 2021, making it the country’s second most popular car brand (closely followed by BMW), while DS sold only 2,362 units.

The DS 7 Crossback is a mid-size SUV and our car has the modern E-Tense plug-in hybrid powertrain. That puts it up against other premium plug-in hybrid SUVs of similar size, such as Audi’s Q3 TFSI e, BMW’s X3 xDrive30e and the Jaguar E-Pace P300e.

Speccing a BMW X3 or Audi Q3 up close to this level would cast the DS 7 car in a much more favourable financial light.

There’s nothing groundbreaking about the DS 7 Crossback shape. It has a curving roofline and a more dynamic stance than the average mid-size SUV, and there’s a fair bit of chrome and intricate main lighting units.

Inside, there are quilted leather and metal finishes, lots of piano-black plastic and an analogue clock. The DS 7 will seem bold, luxurious and refreshingly different to some buyers. For me, it lacks the class and quality of the more formulaic alternatives. The materials in the cabin aren’t quite at the level of an equivalent Audi or BMW.

The central positioning of the starter button and the window switches seems born out of a desire to be different rather than user-friendly, but the DS does have its neat touches. The massaging seats are an unexpected boon, while in the higher position, the split-floor boot gives you easy, out-of-sight storage for charging cables.

Away from the thorny issue of price, the DS 7’s numbers do stack up well when compared with the model’s rivals. With a total of 296bhp and 520Nm of torque from its plug-in powertrain, only the Jaguar E-Pace P300e eclipses it for punch – and the DS is faster from 0-62mph than that car.

It doesn’t feel that lively in Comfort mode, where the over-light steering and sluggish throttle response are a turn off, but in the Sport setting the DS 7 Crossback is more purposeful and even surprisingly quick.

With reasonably frequent charging, I’ve been able to get just under 80mpg from the DS 7, but on a week away with no easy access to chargers, this dropped to around 37mpg. A good 30 miles of electric-only driving seems perfectly possible. That’s against an official WLTP figure of 34-36 miles that beats the equivalent number from Audi and the BMW, but not the Jag. 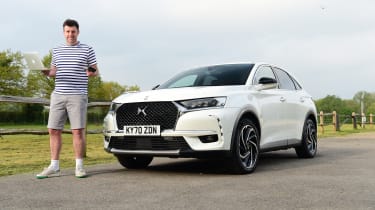